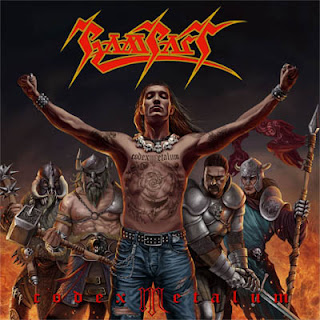 Not usually known for its traditional metal acts, Bulgarian heavy metal act Rampart have nonetheless cranked out an impressive catalog of singles and full-length albums, as well as the odd compilation appearance, on their way to this newest release. The fourth full-length from the group, out April 8, 2016 on Iron Shield Records, continues to cater to their traditional mind-set by delivering another enjoyable release in their catalog.

This here is nicely traditionalist-leaning classic metal in their riff-work, full of tight churning rhythms offering plenty of crunchy patterns and steady, solid rhythms that make for a truly enjoyable ode to the heavyweights of the classic period of the early 80s. The numerous tempo and pace changes on display feature some interesting and enjoyable variations with the band able to change-over into steady, simplistic riff-work or a slightly more up-tempo gallop that doesn’t quite border on thrash but offers that kind of energy and cadence when off-set by the churning rhythm work featured elsewhere here. As well, like most classic metal offerings there’s ripping, fiery soloing and plenty of tight, pounding drum-work on display throughout here that makes this quite fun as well with the more spindly, melodic leads found throughout here as there’s a slew of simplistic rhythms here featuring those melodies running alongside the harder-hitting riffing here. This all leaves the album well-enough if not exactly all that original, though what really tends to hurts this is the light wailing siren-like female vocals that are as an acquired taste as any in the genre. It’s not terrible but it takes getting used to this nasal tone and register over the music as this seemingly cries out for at the very least a gruffer tone than what’s featured here. It works nicely in the context of the music once it gets past the point of familiarity, but overall it’s not so bad.

Though the vocals are something that really hinders this one at times, there’s little else about this one to hold it back here as the sound has enough going on for it that this will undoubtedly appeal to fans of good classic traditional metal as well as those curious about metal from the region on the curiosity factor.

Does it sound good? Order it from here:
https://www.inferno-records.net/mailorder/cds/rampart-bul-codex-metalum-digi-cd-2016.html
Posted by slayrrr666 at 8:14 AM