Astral Path - An Oath to the Void 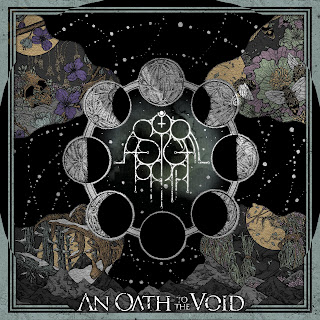 The debut album from Canadian atmospheric black metallers Astral Path offers a decent enough spin on this particular style in the genre as they go about launching their career. This here is based around traditional tremolo riff-work with plenty of swirling melodic keyboards weaving along throughout the tracks which adds a fantastic atmosphere here with the ability of the tracks leads to a celestial ambiance that coincides with the riffing arrangements. This is highly pleasing and engaging which makes for a great time here as the central basis for their work is nicely fused with the fiery traditional tremolo riff-work alongside the rather engrossing atmospheric melodies added together. There’s a rather big stumbling block here with this effort in that the album’s rather simplistic nature doesn’t really offer up a strong sense of variation within here as the album can run through tracks that can tend to feel as though it’s one-note. That’s mostly apparent in the one rather bland track that doesn’t go anywhere because all it does is just run through the same rhythms and melodies for the entirety of the track without doing anything new or varied with it, and it’s quite apparent in the album as a whole elsewhere even with that being the greatest singular example. As well, there’s the short running time as there’s only five tracks which can be quite a shock with the sudden ending, but otherwise there’s a lot to like here.

The tracks here aren’t really that bad and play well within the genre. Opener ‘Maroon Sea’ takes an extended synth-driven celestial riff that turns into driving swirling tremolo riff-work and frenetic drumming charging along the melodic rhythms running along throughout the steady pace as the swirling atmosphere driven throughout the final half makes for a strong opening impression. The Void title track takes simple swirling riff-work and plodding, simplistic drumming as the atmospheric riffing and celestial melodies weave throughout the series of droning rhythms carrying out throughout the extended patterns as the crashing riffing continues into the extended droning finale for a strong if somewhat repetitive effort. ‘Between Appalachia and the Shield’ uses the faded celestial synths crashes into a rather simplistic series of plodding melodic tremolo riffing as the simplistic melodies and steady rhythms carry on throughout the mid-paced riff-work leading into the light ambient celestial-inspired final half for a long, drawn-out and mostly dull offering. ‘A Virulent Delusion’ features immediate blasting drumming and ferocious tremolo riff-work running along through a frantic pace with the buzzing celestial melodies driving into the slow-down section with the light riffing and steady rhythms holding on throughout the final half for a rather enjoyable effort. Finally, album-closer ‘To Vega... Nebulous Anatomy’ uses an extended crackling fade-in intro that gives way to searing tremolo riff-work and frantic drumming whipping through a series of driving paces as the swirling melodic riffing turns into an extended section of atmospheric rhythms and light melodies before firing back into the frantic energy for the finale for yet another solid effort that ends this on a fine lasting impression.

Though the length is the clear-cut issue here, this is still a solid enough representation of the genre that does what the style provides without much change-up and makes for a solid if non-essential listen for aficionados of the style while those looking for more traditional style should heed caution.


Does it sound good to you? Order it from here:
http://astralpath.bandcamp.com/
Posted by slayrrr666 at 1:44 PM