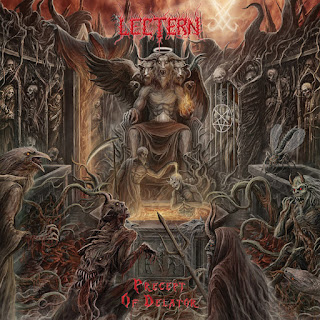 Staying true to their old-school roots, Italian brutal death metallers Lectern have kept their steadfast tradition to mixing a brutal variation of this Floridian variety of death metal with a much harsher, more Satanic bent to their music that makes it more devastating. With guitarist Fabio Mariantoni leaving before recording and being replaced by Gabriele Cruz, the groups’ sophomore full-length was released September 23, 2016 on Via Nocturne.

As is to be expected here, this is a wholly ferocious and blistering effort with plenty of familiar elements to their past present throughout here. The main feature to be found here is the rather sharp, brutal riff-work, managing to work through a strong series of rhythm patterns that showcase a tight foundation with short rhythms and deep, churning grooves. That the vast majority of tracks in this section are built around a thrashing mindset means that they’re fast, vicious and really exploit the fine precision displayed throughout here as the up-tempo tracks and short rhythms give this a distinctly Floridian feel utilizing those similar tactics in their work. This one though adds on a far more blistering and twisting series of riffing over that which adds a frank brutality to the rhythms in this, and given that the riffing still adds a rather old-school vibe to the material is a fine touch. There’s only a minor quibble to be found here in that the album tends to run through a rather familiar and overly-repeated series of rhythms that make up quite a familiar series of riffs throughout here whenever the album drops into the same territory in its pacing. All the riffs are built upon the same general feel and tempo in the usual variants, and while that does lower this one somewhat the fact that rest of the music does stand up with quite a vicious attack that the flaws are lessened.

While it does become some familiar along its tempos, the fact that there’s still quite a lot to like in its overall presentation with a vicious mixture of thrashing old-school Floridian rhythms and brutal attack that it works quite well for those that enjoy either style at play or fans of their past work.


Does it sound good? Order it from here:
http://www.lectern.bigcartel.com/product/precept-of-delator
Posted by slayrrr666 at 1:48 PM