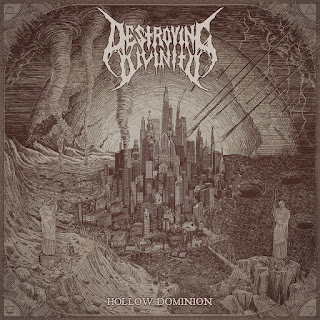 Undoubtedly at the top of their game, Czech death metallers Destroying Divinity has cemented their stance at the top of the revivalist death metal movement years ago, and have now slain all in their wake with yet another demolishing effort. With only a four-year gap between releases to keep the creativity flowing, this crushing and devastating fourth full-length effort was released September 30, 2014 on Lavadome Productions.

Following up their devastating last release, this one manages to carry on a lot of the same formulas that made that release so special and devastating by featuring the kind of technically challenging and complex riff-work within a framework that adds a degree of atmospherics into the proceedings. There’s plenty of ravenous thrashing mixed with technically-charged rhythms that all compliment the type of fiery patterns favored by the group, where it features a wide assortment of riffing to feature that amount of ferocious work here. While this here manages to give this a quite dominant display, there’s also hints of melody featured that carries a rather impressive buffer between these charging rhythms as the band’s ability to charge forward at blistering fashions yet also manage to accompany a slight deviation or variance that actually works quite nicely in support of the more dominant challenging riff-work and blasting drum-work. That carries itself across the album to such an extent that its dynamics allow it to feature enough here which combines that amount of old-school flavor with a more modernized approach to really gel so well here that its appeal is spread out even further by being able to allow for all these different elements into an equally coherent and devastating whole. While it might be a little same-sounding as it goes along, there’s little about this one to dislike.

There’s so much to really get behind with this one that it really furthers and cements their status at the top of the pyramid here when it comes to the revivalist death metal scene that the few minute flaws are so unimportant in the grand scheme of things that this deserves as much appeal as possible with all many of death metal fans required to check this one out.

Does it sound good? Order it from here:
https://destroyingdivinity.bandcamp.com/
Posted by slayrrr666 at 12:23 PM