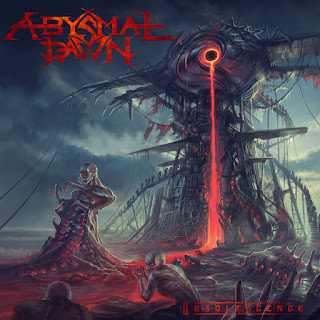 Growing stronger with every release, California death metal machine Abysmal Dawn has quickly become one of the more prominent names in the modern death metal scene with their stunning mixture of old-school rhythms with more modern technicality. Being the only release by the band as a four-piece with second guitarist Andy Nelson leaving the group afterwards as well as drummer Scott Fuller decamping as well, the group’s fourth full-length effort was released October 24, 2014 on Relapse Records.

As with the majority of the modern death metal groups, the focus here is mainly on the album’s unrelenting riff-work being present first and foremost. This one really tends to go for the deep churning riff-work and charging groove rhythms commonplace in the modern scene, all given a fine technical bent that makes the tracks seem far more devastating with dexterous drumming and swirling grinding patterns cropping into the riff-work as well. This makes for a solid intensity to the album that meshes quite nicely with the other sections here where the focus is on the more old-school rhythms as the charge shifts through simplistic mid-tempo tones with sweeping riffs, dynamic drumming and blazing melodic breaks that leave this one with plenty of variety and dynamic shifts between the tracks where it goes nicely between the frantic technicality elsewhere. This does start to wear thin here as the album does come off with more of a sense of familiarity as it goes along here with this one tending to feel rather much like most other bands of the style tend to do as it goes for the kind of familiar burst of grinding brutality and technicality before switching over into a more melodic passage and really makes this struggle to retain the attention as it goes along into the second half as you’ve already heard the bands’ tricks by that point. There’s very little variety with this one that really sticks out here as it’s without fail an either/or style release, and that makes for a finely performed if overall-bland offering. Still, it’s good at what it does which makes it somewhat listenable if not a stand-out effort.

Though there’s plenty of moments where this one comes off as more one-note than it really should as the lack of real variety does wear thin here, this is still a decent enough effort when it really gets going that there’s a lot to like here for most fans of modern death metal to really enjoy and get the most out of this one.

Does it sound good? Order it from here:
https://abysmaldawn.bandcamp.com/
Posted by slayrrr666 at 12:29 PM