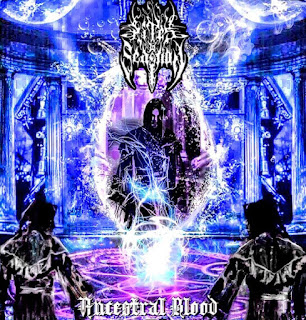 Formed just in 2014, North Carolina-based melodic black metallers Rites to Sedition have taken their influence from the old-school melodic black metal scene to craft an ambitious effort upon the origins of man and his epic quest to overcome occult mysteries. Dropping to a four-piece before recording as Gabriel Lucia took over vocal duties from original vocalist Brian Kingsland, their self-released debut album was released March 29, 2017.

From the beginning, this one comes complete with a stellar series of influences and musicianship that positions them immediately into the genre’s upper echelons. This is mainly built around the utterly phenomenal riff-work present, featuring plenty of thrilling tremolo patterns full of fiery rhythms and a multitude of tempo changes that allows this one to generate a slew of exciting rhythms. By adding in a technicality to these riffs alongside the ability to utilize the grandiose soundscapes throughout here, this manages to acquire a feeling of explosive icy black metal riffing that develops a variety of tempos and patterns throughout here as the vast array of exceptionally glorious rhythms throughout here which help to make the melodic leads all the more impressive. Running over furious tempos as well as plodding mid-paced efforts makes a huge impact on their rhythms by enabling this one to readily shift focus into the varying tempos and not lose any sense of power or grandeur in the attack, making this a spectacular showing that’s able to generate these varying moods and atmospheres here. If you’re into picking for flaws of the album, this one does tend to feel it’s length with the fact that the tracks here really get up there in length and that does make this feel somewhat of a drag as it goes on. However, it’s still not all that detrimental an effort.

With just the most minor of barely-detrimental issues cropping up throughout this one, there’s plenty to absolutely enjoy about this one as there are so many enjoyable and surprising elements to be found here that this makes for an easy recommend for fans looking for melodic or symphonic-heavy black metal.


Does it sound good? Order it from here:
https://ritestosedition.bandcamp.com/album/ancestral-blood
Posted by slayrrr666 at 5:31 PM