Game Over (It) - Burst into the Quiet 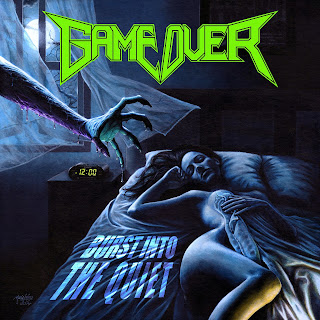 Continuing on from their previous release, Italian thrashers Game Over further showcase their love of old-school thrash that was such a part of their debut effort. With original drummer Med departing and being replaced by Anthony "Vender" Dantone, the second album from the group was released June 22, 2014 on Scarlet Records.

As was the case with the first album, this one offers plenty of tightly-wound, intense rhythms that uses charging riff-work and intense patterns bristling with technical rhythms that are paced much like true speed and thrash bands. Packed in tight formations along frantic paces which give this a wide-ranging density layered across the rhythms with a few smartly-placed breakdowns which act as melodic breathers before going back to those more intense rhythms throughout this that make for a lot to really enjoy with the guitar-work. It’s all fast-paced and generates the kind of fiery energy rampant in the genre back in the old-school days where it’s tight riffing fully encapsulates that scene fully, and when added along with the strong drumming and blaring bass-lines it’s a true thrashing blast. On the whole, there’s not a whole lot to really dislike here with what the band is attempting. The basic attack is good enough, but the riff-work is so tightly-wound that there’s no real room to breathe in their arrangements that it simply just makes itself such a blur of utterly frenetic riff-work that there’s just so little to differentiate the tracks from each other. The short running time for each track that packs all of them into the same overall length is another part of that problem, and it does lower this one slightly even with a generally overall impressive attack.

With plenty of enjoyable elements to be found here alongside a few small flaws that do cause this to slip down slightly, there’s enough here that does work to overcome it’s flaws and manages to work incredibly well for revivalist thrash fanatics or most modern thrashers as well.

Does it sound good? Order it from here:
http://scarletrecords.bandcamp.com/album/burst-into-the-quiet
Posted by slayrrr666 at 12:01 PM