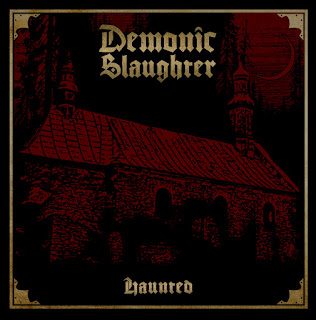 Furthering their connection to the old-school, Polish black metallers Demonic Slaughter have settled into a solid reputation for not only their boundless proficiency but also their dedication to writing and recording material in the traditional old-school manners. With drummer Nuklear Kriss departing in favor of new drummer Opium, the group’s fifth full-length was originally released December 10, 2014 on Pagan Records.

As has been the bands’ penchant from the beginning, this here offers up a non-stop assault of traditional Norwegian-styled black metal without much deviation. This one tends to revolve around simplistic tremolo riffing and straightforward rhythms that charge forward without altering themselves or changing up the stylistic charge here with these being placed alongside harmonic melodies and choppy drumming. This is a mostly continuous assault here that’s unwavering in it’s charge with these elements being brought to bear on the tracks without exception, and these find melodies featured throughout here are really where the majority of the album is taken up by the solid infusion of those melodies running nicely alongside the plodding tempos. When it gets to the more charging sections, this change in tempo and aggression leads to some more engaging efforts alongside the pronounced melodic efforts featured here, though these are still dominated by the melodic mindset for the most part. That is the album’s one weakness here with the rather sluggish, driving rhythms not really generating much energy or fiery rhythms which tends to make for a somewhat bland overall impression here that tends to feature the band going through the same overdrawn, bland rhythms for the most part. It’s not entirely detrimental as the melodies are engaging enough, but this one really could’ve used some extra fire.

Though it’s somewhat hampered by the fact that there are some rather bland and somewhat lifeless melodies brought to bear on the album as a whole, this one still emerges with enough positives from the melodic atmosphere and old-school rhythms to give this one some appeal to the most devout old-school black metal aficionado only.

Does it sound good? Order it from here:
https://paganrecords.bandcamp.com/album/haunted
Posted by slayrrr666 at 3:15 PM