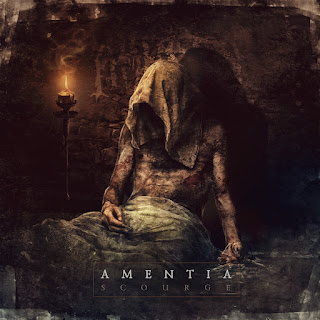 Continuing to unleash the extremity, Belarus-based technical brutal death metal masters Amentia are there to further the melding of complex and challenging rhythms with furious, blasting brutality that has made them one of the more explosive efforts in the genre. Finally returning after a six-year holdover from releases, the groups’ third full-length release was originally released May 7, 2017 on Satanath Records.

From the start, it’s quite apparent that the band is adept at going for the grand mixture of these two elements with plenty of stellar work throughout here. Firing off tight, surgically-precise riffing with spindly noodling with complex rhythms, there’s a great combination of elements at play here that adds to the charging atmosphere of the album. The frantic riff-work and blasting drumming here brings about a stellar series of up-tempo sections that fully spread the realm from furious chugging to blasting thrash beats and ignites a furious onslaught of complex rhythms throughout here that’s exceptionally well-played for generating that kind of challenging, technical work here. While that’s only one part of the album, the other aspect here of its brutality is somewhat lower in execution but no less so in importance. There’s plenty of tight, deep churning rhythms throughout those challenging and complex riff-work that does enhance those somewhat by enabling this one to really go for the kind of pummeling beatdown as it’s featuring thick, deep rhythms slamming over and over again while still maintaining a sense of technicality needed to ensure a rather complex set of rhythms throughout here, and this becomes all the more likeable throughout here with this great assault. It does become somewhat of a minor inconvenience when it doesn’t really do that much to separate the tracks from each other with the whole of the album being a rather indistinguishable blur of tight, complex riffing and deep rhythms, yet that’s really all that really holds this one back.

Despite being slightly hampered by the lack of identity within the tracks throughout here, this is still one of the more explosive and enjoyable offerings in the genre overall and manages to get enough right here that this certainly makes for a welcome addition to any fan of technical or brutal death metal.


Does it sound good? Order it from here:
https://amentia-minsk.bandcamp.com/album/scourge
Posted by slayrrr666 at 1:39 PM