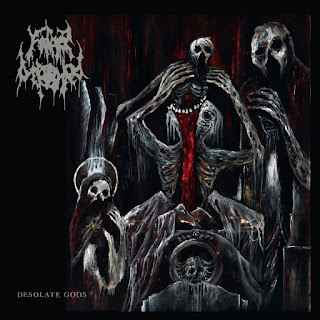 Celebrating their tenth anniversary, Georgia-based death metallers Father Befouled have taken plenty of their celebrated influences throughout their work into one of the strongest, most dynamic bands in the entirety of the cavern-core style of revivalist death metal. Back following a five-year break from releases, the groups’ fourth full-length effort was released June 23, 2017 on Dark Descent Records.

Slowly coming into their own, this is a group that is clearly and quite obviously taking their main influences straight into the overall view of their work. This one takes so much from the ravenous cavern-core style of old-school death metal worship where the main view of the album comes from the tight, swirling riff-work. This is laced with deep, churning rhythms that varying from pummeling lurches to frantic mid-tempo gallops featuring that riffing style, and it comes off rather dark and oppressive throughout here when added alongside the vicious leads and pounding patterns on display. Likewise, the fact that there’s a nice tempo switch here into the traditionally plodding, oozingly slow doom-style sequences where it’s churning riffs and pounding rhythms add even more weight and heft to the music gives this a kind of overall sense of crushing completion that’s quite accomplished and dynamic throughout the album. The only issue is that this only ends up being so brief overall that it really feels incomplete, with the fact that the intro and the instrumental end up wasting time on this one to the point where it never catches on the way it should, ending quickly and abruptly and like this one really could’ve used another track or two to give it a little more weight. However, it’s really all that holds this one back.

Coming up just a little short due to the rather short running time to this one, this one has plenty to like overall here in regards to their overall attack that overcomes this brief shortcoming that this becomes a nice and welcome addition to any fan of this particular cavern-core style or revivalist death metal in general.

Does it sound good? Order it from here:
https://darkdescentrecords.bandcamp.com/album/desolate-gods
Posted by slayrrr666 at 1:16 PM