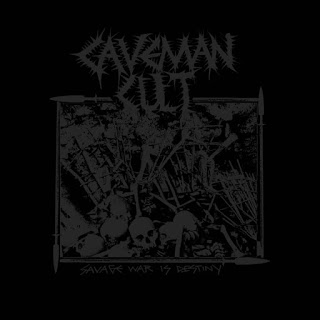 From the sunny side of Florida, war metallers Caveman Cult has done nothing but raised hell throughout the land as they bring their savage attack out of the underground. Released May 17, 2016 on Rotting Chapel Productions, this power-trio continues to bring the goods as they capitalize on their previous demos with their full-length debut.

Despite the sunny disposition of their home-state, this here is anything but as there’s a lot of bleak, ugly work on display here as the group’s focus on war metal aptly demonstrates. Tight, militaristic marches and ferocious rhythms are the hallmark of the groups’ focus here, swirling around ugly riffing and short, blistering tracks filled with lockstep drumming alongside frantic and utterly devastating rhythm patterns filled with truly pummeling, quite raw-styled riffing for the majority of it’s work here and it really conjures a bleak, ugly soundscape. This relentless, air-tight assault doesn’t give up one iota throughout here nor does it allow there to be any breathing room at all with the condensed tracks and ferocious patterns giving this such a full-on frantic attack which scores quite well here, though it does manage to prop up several minor areas within this one. The biggest issue is that the album is so short with only a few tracks here that really manage any kind of significant length out of them as so many of the songs are short, barely a minute long and go by in such a blur as is common-place in the genre that it doesn’t really allow for any kind of chance to let the music really stand out. Though the primitive attack here does come off rather well, it’s not all that well developed to really allow it the kind of chance that soaking in the rhythms allows here because this is such a short release and it doesn’t make for a truly immersive attack with the effort really failing to distinguish itself here. Otherwise, this one doesn’t really have much else wrong with it.

Though the brevity might be a small problem for this one, the fact that there’s quite a bit more that it gets right makes this a rather pummeling and somewhat enjoyable debut release that sets them off on a solid note that will appeal wholeheartedly to black/death metal fanatics as well as war metal aficionados who can’t get enough of the style.

Does it sound good? Order it from here:
http://cavemancult.bandcamp.com/album/savage-war-is-destiny
Posted by slayrrr666 at 11:22 AM