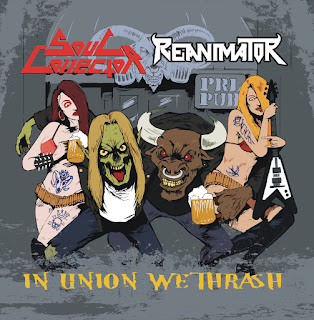 Two of the better revivalist thrash-scene efforts, the Canadian Reanimator and the Polish Soul Collector are among the more impressive and engaging acts in this crowded market that keeps growing by the day. This new split release, released April 16th, 2016 on Defense, gathers ten tracks, four new compositions from Soul Collector and six from Reanimator, with four of their better tracks from their last release alongside two new efforts, brings together a lot to like from both bands.

First up is Soul Collector, and they immediately bring out their best work here with a rabid, snarling attack centered on their vicious riff-work and dynamic rhythms for a truly old-school workout. Based on tight, swirling thrash riffing and plenty of crunchy patterns at dizzying full-throttle tempos augmented with plenty of furious drumming propelling the material along incredibly well, there’s so much sonically to enjoy here that this quickly gets infectious and highly enjoyable as this provides epic arrangements and solid tempo changes like a truer old-school thrash act. This shows off the fact that they’re able to offer a tight plodding epic that builds into a ripping full-throttle thrasher, a more mid-tempo crunch style attack or the straightforward thrasher, and it’s quite enjoyable. They’re not the most unique or original act in the genre, which isn’t a big deal since so many bands are content to really play off the same playbook as it each other, but here the infectious energy and tight performances are more than enough to counter that. It’s really a shame there’s only the three true tracks here with them getting the instrumental intro, but it’s not a major gripe against them and they’re easily the best band here.

Next, Reanimator bursts forth with their more chaotic bent on retro thrashing as this one really lets their ripping Bay-Area riffing take center-stage. Tight, vicious and crunchy with just the right blend of chaos-driven anarchy in the arrangements that provides solid framework here to really showcase their intensity, on the whole this here is rather enjoyable and dynamic while really bringing out a more looser sense of reckless energy in their rhythms that’s quite enjoyable for the most part. The main thing here is the fact that there’s only two original  tracks by the group and then slapped on four of their best tracks from the last release which seems a little lazy here. The other group took the time to compose some original material and while they came up with three plus the original, the epic arrangements provided there don’t quite match up to the work here since their shortest track is still longer than anything on this half of the split, and that really tends to make their side feel like it’s going through the motions more than anything. The music is good, but it’s so familiar because of the repeat performances that it lowers the release slightly.

Though this one does seem to come off a little lower than it really should’ve because of the repeated tracks against the original compositions on display, the fact remains that there’s still so much to really like here that this is a no-doubt inquiry for fans of either band as well as revival thrash fanatics of any kind.

Does it sound good? Order it from here:
http://www.defense.8merch.com/soul_collector_reanimator_in_union_we_thrash-id9115
Posted by slayrrr666 at 10:28 AM