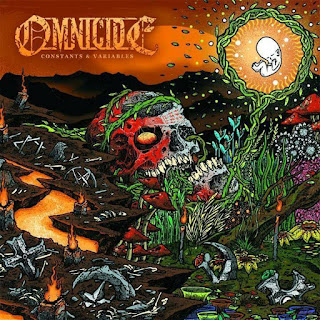 Formed in 2010, the Swiss death/thrashers using the name Omnicide immediately unleashed a demo that sets the stage for a debut that arrived two years later. Now four years after this release, the group unleashes their self-released second collection of tight, crunchy death-laced thrash metal on April 1, 2016.

Overall the album manages to generate the kind of mostly mid-tempo style work that mixes these two particular genres together, offering a rather vicious crunchy throughout here. Taking tight, technical thrash leanings and the swirling rhythms here that give the music an overall strong thrash identity, it gets balanced out rather nicely with the a blasting death metal vibe offering plenty of short, blasting breakdowns which evoke far more modern brutal death metal work than true thrash bands. By opting for a slightly more groove-based chug in these sections, it changes away from the thrash sections into more of a Deathcore-styled attack with the emphasis on swirling -core riffing featured alongside these tight thrashy patterns. This is quite a fun overall attack with a lot of overall effective moments, but does tend to feature a somewhat troubling element here. By adding a strong Deathcore style series of riff-work into these thrash-laced patterns, it causes this come off with a seriously stilted series of tempos and paces here that’s quite discordant and rather puzzling. Rather than go in for the more cohesive collection of material that’s normally expected of such inclusions it seems to stutter and trip over itself by slowing the tempos down unnecessarily which results in tracks which usually have great elements to them but hardly remain consistently enjoyable all throughout in order to really maximize their potential.

Though it somewhat stumbles at times with the different paces and rather clunky rhythm changes that appear throughout here, the basic attack is still a vicious, hard-hitting effort that manages to work overall well\-enough to make this an appealing-if-unessential listen for fans of the hard-hitting death/thrash mixtures usually found in the genre.

Does it sound good? Order it from here:
http://omnicide.bandcamp.com/
Posted by slayrrr666 at 7:59 AM