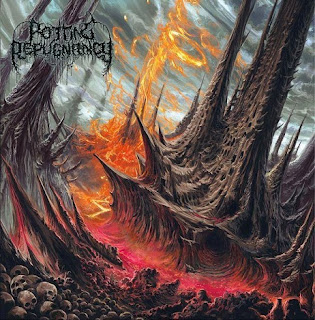 Founded in late 2010, UK brutal death metal upstarts Rotting Repugnancy has established themselves as one of the finest British death metal bands with plenty of solid releases through Sevared Records and a relentless tour schedule. This second full-length album, initially an independent release December 21, 2015 before a March 25th, 2016 reissue on new-label CDN Records, this release packs another strong punch for the group on their way to the top of the genre.

There’s a lot to really like overall about this one, and it takes centerstage here with the explosive and dynamic riffing. Featuring the tight swirling rhythms and deep, frenetic paces that offer up plenty of rather dynamic churning patterns that go along mixing the schizophrenic blasting with a thrashy, old-school attack in terms of tempos and cadence. That’s a far more pummeling attack than would be expected here as the steady paces keeps the churning patterns flowing along into the album’s varied approaches with those up-tempo thrash-like paces or into slower, deep churning grooves which take the brutal rhythms into a sluggish realm which is quite fun when it rev up those slower patterns into far more impactful and blistering realms. This slow, churning approach alongside the tight riff-work makes for another solid plus in that there’s more variety than expected here rather than just the blitzkrieg approach of most modern brutal death metal acts is a rather nice approach and really sets this one up with a heavy yet brutal approach for an overall fun time. The biggest problem here is a common one that plagues a lot of these albums in the fact that there’s just not enough tracks here, with the running list finishing off when it gets enjoyable with the band setting into a solid groove on the second half. Choosing only eight tracks overall does make this fly by in a blur and really doesn’t cause this one to really work to it’s overall potential since it’s just over when it’s getting good. However, with this being the main problem here leaves this one with a rather enjoyable attack overall.

As it’s another rather fun and enjoyable effort that really does have a lot to like overall here in terms of the music but which runs afoul of the slightly-detrimental action of not having enough music really isn’t that big of a deal and puts this into high regard for fans of brutal death metal or those looking for more old-school-flavored acts.


Does it sound good? Order it from here:
http://www.cdnrecords.com/product/rotting-repugnancy-harbingers-of-the-last-judgement/
Posted by slayrrr666 at 11:30 AM