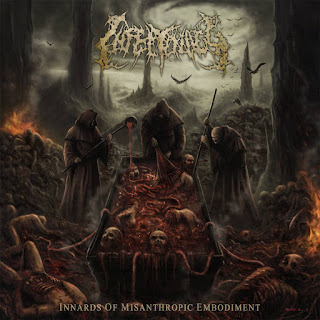 Since their renaming in 2009, Ecuadorian brutal death metal machine Infectology has been branded as one of the most extreme acts to come out of the country, and with a relentless tour schedule that has only refined and sharpened their attack. With a relentlessness that had to be taken outside of the country to fully capture the full-audio assault, the long awaited sophomore album arrives August 12, 2016 on Gore House Productions.

Right off the bat this is a wholly overwhelming and devastating effort that comes about mainly through its series of utterly intense and blistering rhythm work that comes off rather well here. This is tightly-layered and dense riff-work that generates the devastating buzzing hum so characteristic of brutal death metal and manages to sound truly massive slicing and pummeling it’s way throughout the tracks as the varied tempos throughout here allow it to rip and slice through a series of generous mid-tempo gallops and the few frantic, feverish charges where it takes the densely-layered riffing into outer realms of brutality with the blistering tempos. This here is absolutely golden and devastating to listen to, if only the album had any kind of listenable drum-attack here. This rattling tin-can style of drumming is utterly obnoxious and rather distracting from the rest of the music, sounding like rehearsal-room tune-up before they actually start jamming which just has an unprofessional and aggravating tone to it, which is in such sharp contrast to the rest of the album as that is so tight, clean and professional compared to the drumming. It also doesn’t even sound like drums, as the wooden clanging seems more like they’re banging on cow-bones instead of a professional drum-kit, and this factor is such a detriment that it lowers this one significantly and is the only problem encountered here such is the impressiveness of the remainder of their attack.

Had this one been given a quality drum-sound to go along with the rest of the music on display, this would sure be among the top-tier genre efforts of the year but that lowers this one down to the middle of the pack so much that it’s really only advised to those brutal death fanatics who can tolerate that unbearable sound.

Does it sound good? Order it from here:
http://gorehouseproductions.bandcamp.com/album/innards-of-misanthropic-embodiment
Posted by slayrrr666 at 1:09 PM