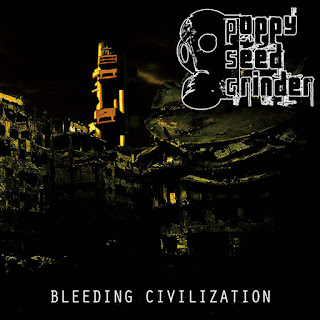 From their inception in the late-90s, Czech Republic brutal death metallers Poppy Seed Grinder have been at the forefront of that country’s growing and impressive output of acts in that style. With mainman and guitarist Yarda the sole surviving member of a roster shake-up that sees new members Klabi on bass, Štěpán on drums and Eddie on vocals, this long-awaited third full-length is released August 12, 2016 on Amputated Vein Records.

As befitting the band’s age and experience, this here is a mostly savage and intense assault of short, deep riffing cutting into the strong series of churning riff-work on display here. This here is tight and chugging-filled rhythms that take full advantage of the different rhythms to generate a ferocious style of full-on brutality in conjunction with the series of tightly-wound riff-work featured here alongside the occasional burst of wailing pig-squealing and grinding patterns in the riff-work for an extra touch of brutality. Even without the grinding patterns featured here, there’s more than enough speed and ferocity in the rhythms to give this a devastating charge yet those extra little slices added to the riff-work adds immensely to the proceedings which makes for a much greater impact when it rips loose and begins generating the kind of intense rhythms that wallow in the speed-drenched up-tempo paces. Coming complete with a ravenous series of drumming blasts that work quite well in completing the grindcore feel within the riffing and a varied vocal approach to match the different rhythm assaults, it doesn’t really leave much wrong with it. There’s really one minor issue to be had, though, in the fact that the album’s blitzkrieg style attack doesn’t really leave much wrong within this one to let the material breathe much, as even within the confined patterns of the genre this one doesn’t really let the rhythms stay stuck in the listener’s head. This has a cool assortment of riff-work within the album at times, but it quickly abandons that in favor of another savage riff before going onto another, and the bewildering arrangements here makes for a general blur of a release at times, all the more so with the short track-lengths. Still, there’s a lot more this one gets right here.

Though it does get slightly undone by the fact that it’s brevity works against it in creating blurry and frantic arrangements, the fact that there’s still a lot to really like here with this one makes for a truly savage and brutal album that will undoubtedly appeal to fans of this style or those who go for the band’s past efforts.

Does it sound good? Order it from here:
http://amputatedveinrecords.bandcamp.com/album/bleeding-civilization
Posted by slayrrr666 at 11:48 AM