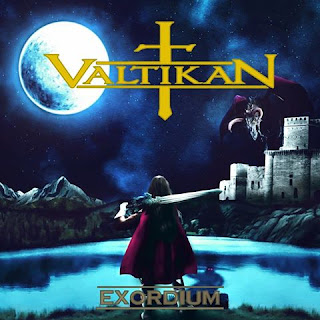 Appearing first as DemonHeart in 2011, Mexican power metallers Valtikan soon adopted this new moniker in 2012 and have since appeared to hone their nice blend of folky rhythms and ripping power metal. Initially a July 10, 2015 release before getting a digital re-release June 24, 2016 on Sepulchral Silence, this fine debut starts the group off on a really impressive note and sets them up in the scene to carry on.

From the outset here it’s apparent the band is clearly influenced by the folkier end of power metal with the band clearly generating some rather impressive and enjoyable rhythms running throughout here with the main focus running throughout here being the ripping power metal riffing. Strong, energetic rhythms and relentless full-throttle drumming carrying the tightened speed-metal hallmarks of the genre to it’s normal running grounds, this part of the album is wholly enjoyable enough on it’s own before the band even attempts to introduce the folksier parts here with the nominal interjections of medieval rhythms and instrumentation throughout the tracks here. However, rather than dominating these tracks this one instead allows them to run through these elements in select spots in the music and then relying on their more traditional power metal arrangements to carry the rest of the load on the album, which is a wholly appreciative approach in that there’s still room for their medieval runs and rhythms while still packing a heavy-end blast, most notably on the band’s epic arrangements which allow for spirited sections of jaunty rhythms and localized patterns alongside the ripping sections to come through. For a debut this is quite nice and really manages quite a lot to like, making for even more to like here with only one minor element to creep in here which is the rather jumbled and crowded manner of their epics in that they cram in so much that it’s hard to breathe and really focus on anything as it’s quickly onto new sections and arrangements which gets a little overwhelming when they have a much easier time accomplishing this in their shorter tracks. Still, for a debut this is a highly impressive one.

Though it gets a little overlong for it’s own good at times, this is still a nicely enjoyable and impressive debut from this group which has enough elements at play to really appeal to those who prefer the heavier end of folk-influenced metal or appreciate the bands’ attempts to incorporate those elements together into enjoyable power metal.

Does it sound good? Order it from here:
https://sepulchralsilencerecords.bandcamp.com/album/exordium
Posted by slayrrr666 at 10:27 AM