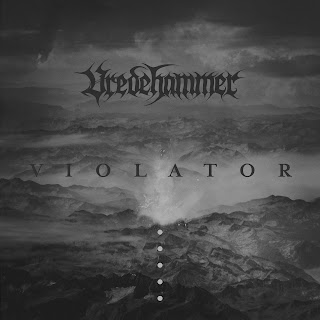 Originally conceived as a studio solo project, Norwegian black/death metal stalwarts Vredehammer have since grown into a fully-fledged unit as a revolving door of musicians have joined mainman Per Valla’s project, Backed with a new rhythm section of bassist Stone and drummer Felix and a March 18, 2016 release on Indie Records, this pounding second album carries the high stamp of quality they’ve been known for from the beginning.

Essentially this here is a strong and imposing effort that manages to mix together the traditional old-school second-wave of Norwegian black metal with a strong, defining death metal crunch that produces some devastating results here. This mixture of work ends up giving this the steady tremolo-picked rhythms and majestic mid-tempo sprawling sections loaded with atmosphere prevalent in numerous black metal bands of that time while mixed together with the deep churning rhythms of death metal. It’s a fantastic mixture that gets some devastating work out of it, and is one of the better parts here, as the more relentless tracks are furious and boundless being filled with the rage and intensity usually found there yet still retaining a few select appearances of melodic sprawling to offset the chaos when it slows down the tempos. This gives the album some really enjoyable tracks here, though there is some minor flaws found here when the tempos change over into those sections with the noticeable drop-off in intensity being so obvious that it brings down the tracks slightly with the loss of energy from these sections. Other minor flaws show up in the series of jangly, discordant rhythms that pop up in a few tracks which is just so off-beat and jarring that they stick out and really aren’t that appealing overall, but it’s not nearly enough to off-set the more pronounced positives featured.

Though there’s some minor, slightly detrimental flaws to be found here, there’s more than enough positives found which are far more impactful to the album as a whole anyway that this stands as a fantastic effort for those looking to explore more old-school black metal or to see what else the second-wave inspired in the genre.