Deathstorm (Aus) - Blood Beneath the Crypts 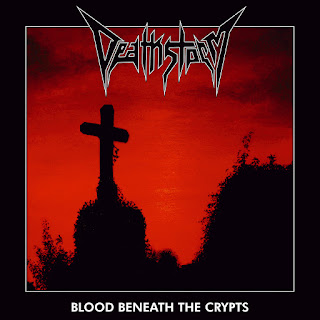 Following a three-year stint as Damage, Austrian thrashers undertook a name-change to Deathstorm in 2010 and have so far released several EPs as well as what’s to become their second full-length under this banner. Hammering out truly vicious and pummeling Teutonic-flavored thrash with a vengeance, this effort was released May 27, 2016 on High Roller Records.

This here gets going right from the onset as there’s a rather enjoyable sense of dynamics present here with the work displayed, which is presented in two roughly similar-but-still-dramatic styles. The main work is tightly-wound, frenzied riffing with plenty of energetic rhythms to create frenzied blistering thrashers which manage to work along quite familiar strains of old-school German-tinged efforts from their prominent era back in the 80s. Likewise, the fact that there’s also a deep, churning mid-tempo charge with plenty of solid heavy rhythms and churning guitar-work gives a wholly darkened feel as those tracks manage to take those blinding patterns along a more focused and restrained sensibility quite nicely with the rabid intensity. It does have one absolutely obvious and rather detrimental flaw here in that it seems a little short with only eight tracks and barely a half-hour’s work of music due to that, but overall there’s still plenty to like here especially when the band runs through the more frenzied patterns. It really could’ve used a few extra tracks here to make the music seem a little more explosive and dynamic, even with it being this enjoyable from the onset.

Though this one does tend to fall into a minor trap with the overall brevity hurting its execution, there’s more than enough truly gripping and vicious old-school flavored thrash to appeal to just about any fan of this German-flavored take on the style as well as fans of their previous work or just thrash in general.

Does it sound good? Order it from here:
http://deathstorm.bandcamp.com/
Posted by slayrrr666 at 8:09 AM