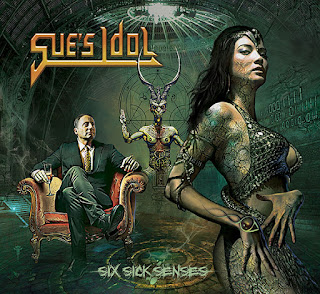 Bringing together some heavy hitters, Las Vegas metallers Sue’s Idol has undergone a large line-up shift in the years preceding this release in the form of bassist Steve Habeck, synth by Mitch DeMatoff, and the infernal maestro himself Toby Knapp sharing lead guitar duties. Carrying on together for their second release, this hit the shelves in February 2016 on Crushing Notes Entertainment.

Even with all the personnel changes, there’s still plenty to like here about this one. There’s the fact that the album’s technical matters are far more enhanced here is a big part of that, as the chops from the musicians involved makes for a rather dynamic and whirlwind showcase of challenging riffing and strong, propulsive rhythms that are intermixed nicely with the rather nice steady paces featured, giving this an appropriate crunch while delving into the series of dynamic, dexterous rhythms featured. It’s all added together with the old-school production tone that strikes the right notes almost for the entire duration as this one contains a rather impressive feel that matches the tight, crunchy riff-work that’s featured here. There’s even plenty of fun to be had with the album’s overall simplicity as though the riffing is somewhat complex it does degenerate into a series of rather straightforward efforts a couple times here, and the album does become quite one-note and narrow-minded in the second half. It’s an interesting dichotomy between these sections as they’re fun in terms of performance and execution yet once it comes to the arrangement of them they’re so simplistic and repetitious that there’s not a whole lot that really causes this to stick out in the genre all that much even though they’re still quite lively and up-tempo. It’s easily the one aspect that lowers this one.

While not a completely lost effort, this is still quite an overall enjoyable effort that if nothing else has a few minor elements needed here to really sell this one as being one of the better releases in the genre then has enough positives to really make it worthwhile for fans of this kind of simplistic-if-lively traditional metal or fans of the creative components.

Does it sound good? Order it from here:
http://suesidol.bandcamp.com/releases
Posted by slayrrr666 at 1:13 PM