Hellbringer - Awakened from the Abyss 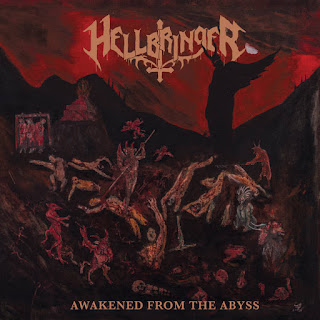 Formed in 2007 as Forgery, Australian thrashers Hellbringer quickly eschewed that for their more familiar moniker and have quickly risen in the ranks since as one of the better Aussie thrash acts. After a four-year wait between releases, the power trio is finally ready to unleash their thrashing best on this second full-length released August 19, 2016 on Iron Pegasus Records.

As was the case from their previous work, this here is a truly rousing and thrilling thrash effort that contains a ravenous and truly enjoyable old-school vibe throughout here. The tight, ravenous riff-work and straightforward tempos are at the forefront of the bands’ attack, ripping along through a series of interweaving rhythms with the occasional burst of tight speed-metal blasts that add a nice intensity to the more traditional thrash rhythms. With these offering the type of varied, traditional material as there’s numerous occasions of the massive mid-tempo marches with sprawling tempos and a more relaxed pace with the majestic marching alongside the more dominant and explosive full-throttle tempos that take on a more striking tone being placed within these slower tracks. They generate a much more dynamic old-school attack with the frenzied riff-work and varied patterns that are on display throughout here, which is where this one does stumble about slightly. The fact that this one does seem somewhat schizophrenic and quite scattershot in regards to it’s more frantic rhythms as they tend to get thrown around into the arrangements quite haphazardly and the segways into these arrangements are very awkward as it just transcends into these intense thrashing sections without any build-up or set-up which makes them seem a little sloppier than expected. The old-school shouting vocal approach might be somewhat hard to take for some, but it works well enough to be a fine enough addition to the overall sound as the album’s awkward transitions are the real weak point.

Though it does come off well enough with a string of high-energy, up-tempo thrashers that are effectively old-school enough the way it goes about them is a little off which doesn’t make this a terrible effort at all but instead makes this one mostly for those old-school fanatics or revivalist fans who really appreciate that kind of approach the most.

Does it sound good? Order it from here:
http://hellbringer.bandcamp.com/
Posted by slayrrr666 at 1:15 PM