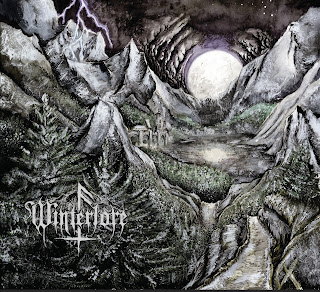 Founded back in 2004, Utah black metallers Winterlore have cited an unhealthy obsession with Nordic-inspired, fast, raucous, noisy black metal, and have spent much of their time honing their craft in the local scene. With the addition of R. Sodomizer on guitars, the band prepares this self-titled second release April 29, 2016 on Slaughterhouse Records where the band’s sound is more heavy and raw, yet more accomplished as well, showcasing their growth.

Frankly this here is such a straightforward and serviceable attempt at employing the old-school black metal style that it’s almost possible to believe it was originally released back then. The riff-work here is straight-up second-wave Norwegian inspired to a tee, firing off majestic, epic swirling tremolo riffing and buzzing speed-metal patterns that generate a blend of deep, churning patterns that allow for some decently heavy arrangements as well as furthering the intense up-tempo paces. This here is quite an impressively up-tempo effort that carries it’s raging, fiery tempos here throughout this one with a rather strong amount of vibrant patterns holding this one firmly in line with the speed-drenched paces of the old-school groups, and when it occupies these raging tempos the band is firing on their style at it’s best. When it does go for the expected majestic sprawling sections that bring the paces back into the mid-tempo while letting the swirling leads become much more melodic and offsetting those straightforward sections it further creeps into the old-school even further here. That in itself is the album’s main weakness for it doesn’t really do a whole lot throughout here that really strikes up any kind of originality, and the whole overall approach is so firmly entrenched in aping this particular brand and style that it never really focuses on anything new, instead merely focusing itself on admittedly-competent retreads of the familiar second-wave school coming from Norway. That makes for a somewhat bland focus at times, but it’s still enjoyable enough here due to that competency.

As it’s such an unabashedly old-school throwback band that doesn’t really do anything new but does what it does really well and lively, there’s some fun to be had here with this only for those who are unequivocally fanatic about old-school-worshipping groups or US black metal attempts at the style, while those looking for more originality are advised to look elsewhere here.

Does it sound good? Order it from here:
http://winterlore.bandcamp.com/
Posted by slayrrr666 at 1:00 PM