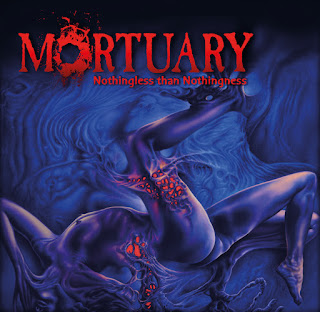 From the beginning back in the 80s, French death/thrashers Mortuary have steadily created a framework that makes them one of the unsung and underrated efforts in the style with plenty of rather fun times in their discography. With this being the last recorded output featuring guitarist Paul before his leaving the band, their fifth full-length effort released January 8, 2016 on Gorgeous Productions shows the band at the height of their powers after a six-year break between releases.

For the majority of the album’s running time, this here is a truly ferocious and relentless death/thrash offering showing a decidedly energetic and rousing thrash attack with simplistic riff-work and tight rhythms galloping along here. This is a really engaging and rousing effort with the explosive tempo changes forcing this into an endless series of simple thrashing riff-work and a focused intensity on charging along at the fastest possible tempo throughout here which really helps to make for a strong and confident attack. That’s apparent when the band slips in slightly down-tempo rhythms that takes on a rather sluggish cadence with the deep, churning groove-styled patterns that gives it a death metal touch with it’s rather frantic thrashing madness alongside the material here for some rather impressive dynamics and variances in the arrangements to further make for a wholly appealing effort. The fact that there’s such a one-sided attack throughout here does end up leaving this one with the impression that it really only knows one trick since it manages to feature not too much differences in terms of it’s overall approach and style beyond merely dropping the tempos which it does nicely but can get lost in the shuffle for those unfamiliar with this approach. There’s little need for that to be an issue, as the material is quite impressive and enjoyable for the most part.

Despite popping up with a somewhat minor and rather useless flaw for the most part, this here is one of the better releases not only of the genre but also in their catalog as their consistency and competence makes for an album that will appeal to any fan of old-school death or thrash metal as well as any fan of the bands’ previous works.

Does it sound good? Order it from here:
http://mortuarynancy.bandcamp.com/album/nothingless-than-nothingness
Posted by slayrrr666 at 4:03 PM