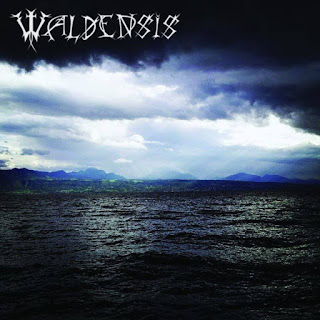 Wasting little time getting started, Swiss melodic black/death metallers Waldensis quickly managed to have their first work issued out to the public after their formation. The three-piece outfit’s first release, out June 1, 2016 on Sepulchral Silence, shows off the bands’ strong musical prowess on this dazzling instrumental effort of fiery old-school black/death metal.

As would be expected given this strong style, the music here is predominately a mixture of blazing black metal-styled tremolo riffing set to the deep, churning blasts of death metal, given an especially epic feel here with the rather extended arrangements on the tracks. There’s a more pronounced melodic tendency running throughout the tracks, though, as the swirling rhythms and relaxed leads here make this quite evidently focused on the melody-driven leadwork with the effort rapidly descending into slow, plodding tempos that are seemingly specifically designed to showcase the furious guitar-and-keyboard melodies, and they’re pretty competently played and performed which makes this stand out nicely against the less-prominent blasting patterns. That does bring up the incredibly minor issue of this one really not utilizing those blasting patterns to it’s fullest since they’re barely on the album and would’ve been much better served on a much more fully-realized setting, taking on a much more prominent total of their sound which doesn’t mean all that much when the fact that it’s clearly not all that much of a priority. Perhaps a more pressing one is the lack of actual tracks here with the shorter running time and then featuring the bland outro which gives them even less time to work their magic like most EPs are.

Though it does have the usual problems associated here with EPs in not really having enough material to really showcase their sound to it’s fullest, this is still a wholly appealing blend of fiery melodic black metal and death metal which is a fine first start for the group and makes this solid enough for those who appreciate this style.

Does it sound good? Order it from here:
http://sepulchralsilencerecords.bandcamp.com/album/skies-of-deception
Posted by slayrrr666 at 12:11 PM