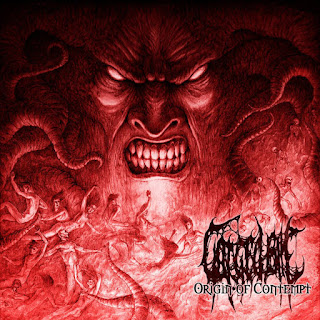 Part of the country’s burgeoning death metal scene, Russian brutal death metallers Gorged Bile has quickly become one of the top practitioners of the style with their fevered, intense style. With Ivan Shirakov appearing to settle the bands’ vocalist problems by settling into the lead singer position, the band prepares to release their second full-length in as many years on August 31, 2016 via Ungodly Ruins Productions.

As is standard issue fare for more brutal death metal acts, there’s a rather deep and churning series of riff pattern present here that whips up a storm of intense patterns throughout. The album’s penchant for tight, frantic chugging riffing and steady patterns keeps this one blazing along at a steady, pummeling mid-tempo pace without much deviation to be found here that really overall makes this generate the kind of dirty, grungy feel typified by the genre. This one really gets the most out of itself at that point as well, fully taking the brutality to a truly blistering, frantic mindset here with this chugging riff-work working nicely in conjunction with the dynamic, choppy drumming and slinky bass-lines present which is weaved through a nice varied series of tempos and paces throughout this. Although this attack greatly enables it to work well within the confines of the genre, the fact that this here doesn’t really plow any new ground is perhaps the lone downfall here as the group’s attack leaves them with the prototypical tightly-wound, frenzied blur of brutality that runs rampant in the genre. The chugging and blasting drumming here aren’t anything new and does cause this to come off rather familiar and routine. Likewise, the album’s instrumental breather doesn’t really make much sense with it really just seeming to be a rather odd mix of sounds that aren’t really explained and is placed a little late in the album to be considered a mid-round breather so it’s quite an odd placement overall. Still, it’s not all that terrible a listen.

While this doesn’t really tread any new ground in a well-worn genre and has a questionable choice or two amongst it’s material, there’s plenty to enjoy here as the material and enthusiasm is more than enough to make this an appealing choice for this frenzied type of brutal death metal or extreme metal in general though others out there who like more than the norm should heed caution.

Does it sound good? Order it from here:
http://gorgedbile.bandcamp.com/
Posted by slayrrr666 at 1:49 PM