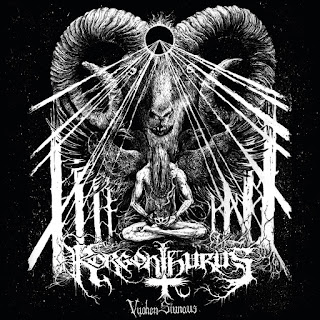 Lead by one of the genre’s figurehead, Finnish black metal onslaught Korgonthurus has been a showcase for the mighty Corvus to display his prowess following his leave from Horna. Battling through line-up changes as well as a seven-year gap between previous releases, the long-awaited second album from this mighty beast arrives May 27, 2016 from Woodcut Records.

Continuing on from their previous release, this effort continues to showcase the band at it’s best exploring the Finnish brand of black metal. With their propensity for deep, swirling tremolo riffing and a gravelly, raw production highlighting the chaos, this gets a solid backbone here with the riff-work offering the kind of feral savagery and intense tremolo lead-work that manages to dive around chaos-riddled tremolo patterns and relentless blast-beats all given a superbly raw and tortured tone that best describes the Finnish style. The inclusion of more light, laid-back tempos serves as the appropriate buffers against the insanity to make them appear far more explosive and energetic by barely moving along with the whispering vocals and trinkling riffing barely sustaining any kind of life. That, though, only makes the raging rhythms that much more explosive with the ability to get that kind of explosive energy out of the other rhythms featured here which aren’t in the slightest bit that lively and the chaotic nature comes off as highly enjoyable. That in itself is the album’s single major downfall, in that when it does employ these it’s way too downbeat and barely energetic at all which is thankfully only on a few tracks but still manages to come away as the biggest problem. Outside of that, there’s also no need for a near fifteen-minute epic closing track that really doesn’t need to be that long and could’ve been shortened significantly, and all in all it’s not all that bad of an album.

With most of the problems here relating mostly to the few minor issues in terms of life-less sections while there’s a lot more to like here when it does go for the blasting-heavy sections, it gets plenty of enjoyable elements that will undoubtedly appeal to fans of the Finnish wave of raw black metal or those that like that sort of genre to begin with.

Does it sound good? Order it from here:
http://woodcutrecords.bandcamp.com/album/vuohen-siunaus
Posted by slayrrr666 at 12:02 PM