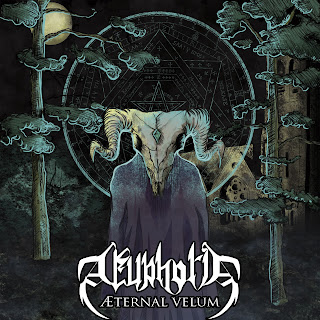 Formed just one year ago, Argentine tech-death metallers Aeuphoria have sought to create an impressive blend of atmospheric elements within the realms of dizzying technical riff-work. Now ready for their full-on debut release, this was originally an independent release April 4th, 2016 before getting reissued May 20 by Magik Art Entertainment and starts them off on a note.

Due to their approach of mixing the atmospherics within their music, the group manages to combine some rather nice elements to their music with a lot of rather spacey ambient sections serving as intros to the tracks as a whole or accenting the rest of the music with the keyboards wallowing away in the background as sprawling background accents to the pummeling attack dished out. That attack itself centers on choppy, swirling riff-work that occasionally descends into wanking rhythms but manages to mostly remain tight and blistering with the challenging and complex arrangements being dished out signalling its connection to the technical realm. Those are a fine mix of jangly wankery and strong, composed accents that make for a wholly appropriate and dynamic approach that’s given quite a wide berth here while the accented rhythms are occupying a mere back-up role, and the variety of this approach where it works both as the driving force within the music as well as the fine backing musical accents creates a much richer, more mature approach than initially expected and stands out even more here given the band’s infancy within the scene as well as the fact that there’s nothing else released beforehand to show the band’s progression. There’s a minor issue here where the band does descend into full-on wankery with it’s technical riffing which just comes off as wholly cliched and completely unoriginal as they go through their paces throughout here without really accomplishing anything of any real deviation within the music, and with the tracks being this short and brief that can be an issue for some getting into the band.

Despite some minor amount of issues that serve themselves mostly as a result of their youthfulness and inexperience that should get ironed out and refined more as time goes on, there’s enough at work here that this one will mostly appeal to those who can’t get enough of that wanking style of tech-death or those who appreciate the more technical bent towards death metal as a whole.

Does it sound good? Order it from here:
http://aeuphoria.bandcamp.com/releases
Posted by slayrrr666 at 3:21 PM