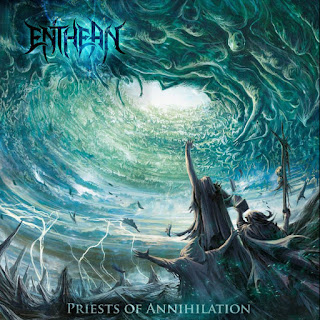 Formed in 2012, South Carolina technical death/black metallers Enthean have quickly spread throughout the underground gaining in experience as they’ve already released a demo tape shortly after forming. As a minor line-up shuffle sees new bassist Adam Rush joining the band after the recording as he didn’t partake in the sessions, the groups’ self-released full-length debut effort arrives May 20, 2016 and sees them leave a rather strong first impression.

This here is an incredibly strong debut, which scores a lot of points here with the professionalism of their work given a rather wide berth here by the way the album goes for such a vast array of influences and soundscapes. There’s not a single dominant factor present in these tracks, which are given a wide berth with the inclusion of swirling tremolo riffing and scathing keyboard work that mixes together with light sprawling melodic sections to recall a vibrant and furious black metal release, yet the main driving rhythm sections playing underneath these elements is a charging, complex series of arrangements that are more in-line with technical death metal acts. This in the process leaves the group as a rather strange dichotomy, with a melodic section up-front yet a driving and aggressive one utilizing the rhythms underneath it all, and they truly do manage to mix these works together in such a way as to never let one element become the main focus for too long with plenty of dynamic tempo and mood change-overs into either section that is also quite nice with it being another chance at a display of their songwriting prowess and technicality that marks the group off on a high-note overall. To this impressive and adept at that level of maturity and showmanship at this stage of their career is an impressive feat as these influences are made to work together surprisingly well with plenty to like about it, and in the end really leaves the bands’ attempts at epic showpieces to be the lone Achilles heel to this one. There’s plenty of times where the band does get a little too fancy for its’ own good and tries to shoehorn elaborate, extended arrangements here simply to elongate the running time and comes off as far too showy when the band is much more adept simply letting their attack work for themselves.

Though stuck with a minor bit of youthful exuberance and inexperience that pops up from time-to-time, overall this one is still quite an immensely enjoyable experience at them being able to drag these influences together so well that it really does appeal to numerous different fans of extreme metal and those looking for a little more adventurous work than what’s normally found in the genre.

Does it sound good? Order it from here:
https://enthean.bandcamp.com/
Posted by slayrrr666 at 9:32 AM