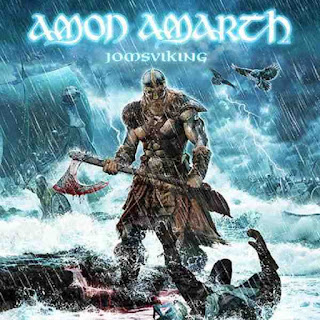 Artist: Amon Amarth
Release Title: Jomsviking
Year: 2016
Label: Metal Blade Records
Genre: Melodic Death Metal
Tracklisting:
1. First Kill
2. Wanderer
3. On a Sea of Blood
4. One Against All
5. Raise Your Horns
6. The Way of Vikings
7. At Dawn's First Light
8. One Thousand Burning Arrows
9. Vengeance Is My Name
10. A Dream That Cannot Be
11. Back on Northern Shores

One of the first bands in the style, Swedish melodic death metal mainstays Amon Amarth have been steadily employing their blend of black and melodic death metal into being one of the best bands in this style. With long-time drummer Fredrik Andersson stepping down and the studio parts recorded by Tobias Gustafsson, the bands’ tenth full-length effort was released March 25, 2016 on Metal Blade Records.

As has been the case from the start, the group here certainly knows their way around melodic death metal riffing, and that continues here with this one generating the kind of fiery melodic rhythms that has long been apart of the group’ core sound. Blazing with hummable, dynamic riffing that’s filled with swirling melodic leads alongside the deep, driving charge that propels the songs forward, the melodic tendencies of the band are at the forefront of the album overall. With the main rhythms adopting their signature swirling tremolo-picked patterns while alternating between the glorious, triumphant marches, full-speed thrash-paced frenzies or a more relaxed mid-tempo pace with a deeper, churning crunch pattern to the main rhythm-work, there’s quite an impressive mix of their usual work featured here that creates a driving blend of black, death and minor elements of thrash into the overall package that’s found here. This usual amount of variance creates a wholly appealing ebb and flow within the album as the different pieces take prominence on select tracks which is always wrapped up with melodic lead-work that’s all tight, frantic and off-sets the vicious work on display here as the album does continually shift gears to a fault. There’s way too many sections within this one that could’ve been handled with a slightly more upbeat vibe as the attempts to showcase the metalcore-leaning riffs don’t gel well with their sound at all. It’s just obviously attempted to interject a variety into the tracks but the mechanical, chugging rhythms are out-of-place and stick out quite obviously against the more natural-sounding riffing elsewhere here. As well, it’s all too familiar and does the same thing too many times over, but as it’s been there since the beginning it’s not that bad of a detriment and doesn’t hurt it that much.

Still sticking with their formula through thick-and-thin, the group’s obviously patented sound that hasn’t bit them before continues to serve them well as it generates a strong overall effort that while not as important or dynamic as what came before it still has plenty of appeal for fans of the band so far as well as those looking for genuine melodic death metal acts.

Does it sound good? Order it from here:
http://www.indiemerch.com/metalbladerecords/item/38633
Posted by slayrrr666 at 1:04 PM