Enchiridion - The Realm of Blackened Perdition 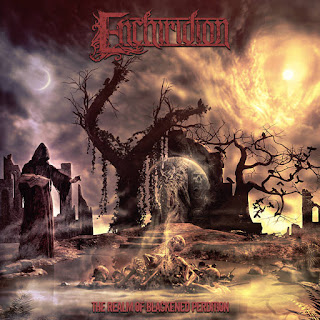 Coming together in 2013, German melodic death metal newcomers Enchiridion have used the time between their first release to hone and refine their craft into a fine concoction. With newcomer David joining the group on keyboards to make the group a sextet, they prepare to independently release their full-length debut August 12. 2016.

For the most part this here is a striking and far more accomplished debut than expected which manages to make stellar use of it’s rather energetic riffing throughout here. The main driving patterns here are quite well formed here at giving this the kind of driving speed and energy that’s mostly missing in the genre as there’s a fast and engaging style on display with plenty of the tracks driving out at a generous gallop. This here makes the sparkling melodies all the more enjoyable with the frantic nature driving this one along through the faster thrashing paces while glorious keyboard rhythms fire away in the background while the remainder of the song gives off a strong series of blasting rhythms or furious driving patterns to keep this still a firmly death metal act. While that’s the case, the addition of the melodies sprinkled throughout here makes this a significantly lighter act rather than the deep, churning main rhythms usually featured in the genre that simply manage to have keyboards sprinkled throughout them, and it’s a rousing experience to get the band playing at these faster speeds while still incorporating these melodic accents. Still, for as much good as the main attack is throughout here it does suffer a serious case of overkill here as this is a significantly bloated and overdrawn effort which really has too many tracks here. There’s no need for the instrumental breather to be here which eats up the running time placed near the near instead of being a traditional mid-album break, and the cover at the end is simply superfluous filler that takes it’s toll on the album as both of these issues here really make the album much longer than it really should’ve been. As well, dropping one or two of the repetitive tracks on the second half, especially some of the longer near-six-minute pieces would help that tremendously as it just feels way too overlong for a debut of this type, as despite how good the music really is this could use some trimming.

Though their enthusiasm to share their music is more than welcome, the fact that this one simply provides too much of a good thing here does come back to bite this one somewhat as it’s bloated, overlong and repetitive approach does make this a wholly inviting if somewhat limiting effort really only for the most devout melodeath enthusiasts who can look past these issues somewhat.

Does it sound good? Order it from here:
http://enchiridionofficial.bandcamp.com/releases
Posted by slayrrr666 at 4:48 PM