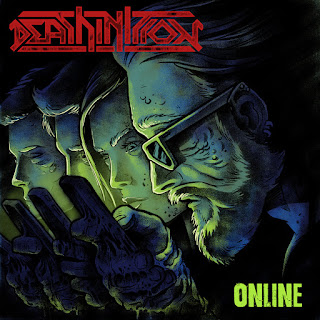 Formed back in 2008, Polish thrashers Deathinition have taken on a dedicated stance to feature plenty of enjoyable old-school thrash elements with a decidedly more modern take on the genre to create one of the finest thrash attacks in the entire revivalist scene. After a successful EP release and a couple of split releases to their credit, the groups’ full-length debut offering was self-released January 28, 2017.

Much like their past works, the group is clearly indebted to the typical Bay-Area style of work in the genre just with a slightly European influence seeping through. Being filled with tough, steady galloping riff-work that packs that same crunch as an endless variety of revivalist thrash groups, this provides the album with a continuous stream of simple, enjoyable riffing patterns that makes for a nice variety of attack here. That comes from how this one goes through a nice variety of attacks here as this one slips between the tried-and-true mid-paced chugs or thrashing gallops which is quite an overall impressive experience as each one provides plenty to like about this. The chugging slows this down to the point of acting as a solid counterbalance to the far more intense galloping that gives this one a solid amount of intensity and energy which makes for a solid experience here. That, in essence, is somewhat the only flaw to this release in that there’s not a whole lot else to this one, it’s pretty much just one set factor to their approach that it really does seem somewhat of a one-note attack. There’s not a whole lot else to this one beyond either mid-tempo or faster-paced efforts, and while that does seem like a good variety for the most part there’s not much else to this one so it does wear out its welcome somewhat. Otherwise, there’s not a whole lot to lower this one.

Despite somewhat falling due to its rather one-note approach that both changes up the approach as well as offer up an overly-familiar attack for the most part, there’s still quite a lot to really enjoy here with this one that it does have some merit for fans of the revivalist thrash scene in general.


Does it sound good? Order it from here:
https://deathinition.bandcamp.com/album/online
Posted by slayrrr666 at 2:47 PM