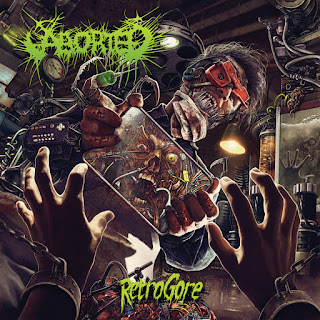 As has been the case for a while now, Belgian brutal death machine Aborted has been one of the most consistent and impactful bands in the genre with a slew of impressive releases and full-lengths that continues here. The group’s ninth full-length release, which sees Ian Jekelis join in on second guitar to round out the group to a quintet now, follows up the anniversary EP with an April 22, 2016 release on Century Media Records.

With what has been released so far in their catalog, it’s pretty easy to tell what’s going to be at play on the groups’ albums. What we get here is the same utterly frantic riffing full of dynamic razor-wire technical rhythms that generate a flurry of tight, mechanical-sounding patterns that simply ooze forth with brutality that comes off all the more impressive when added alongside the surgical rhythms and lasting drumming raging along at inhuman speeds that continues throughout here. That technicality extends beyond the main rhythms into the jagged, slicing soloing on display which helps to make for a more complete, encompassing display of complexly-played rhythms and charging brutality that makes the group so potent and destructive. Still, what makes the band so engaging is when it drops the technicality in favor of more traditional death metal patterns coming complete with dramatic sprawling sections offering melodic buffers between the utterly frantic patterns featured within here, slowing the tempo down into a mid-tempo chug that breathes a little extra life into the proceedings which then only makes the brutality stick out even further. This mix of brutality filled with hyper-speed rhythms with the more traditional elements alongside a slower, more melodic side is a highly impressive display that’s expected of the group when they’ve been at this for that amount of time, coming across with a sense of professionalism and competence that’s engrossing and impressive. There’s not much really wrong with this type of attack, as it’s mostly down to a listener’s endurance matter on this kind of effort about how much can be taken before it tends to descend into the same guttural noise that signals the end of it all that does creep up here, as once it gets to the second half the album’s already displayed all it’s tricks and can bring the material into an overly familiar route where it just blends into the same guttural noise which is the only real problem here.

Considering the professionalism and competency on display with this one, it’s not much of a surprise that it’s as good as it is here with this one really managing to only be too quick to pull out the same tricks for its only real flaw making this one a wholly worthwhile addition to any fan of brutal death metal or those of the bands’ past work.