Sailing to Nowhere - Lost in Time 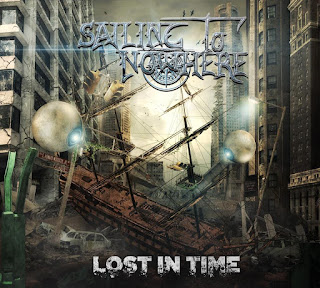 Following the success of their previous work, Italian melodic power metal newcomers Sailing to Nowhere have certainly grown in their enthusiasm and performances since the beginning as they’ve managed to enhance their nautical theme effectively. With the band experiencing a rash of personnel turnover to include female vocalists Helena Pieraccini and Clara Trucchi, new guitarist Emiliano Tessitore and keyboardist Alessio Contori, their sophomore release was initially released April 14, 2017 on Underground Symphony.

Once this one starts up, it’s quite an exuberant showing of solid mid-tempo power metal that readily showcases the best aspects of the genre at hand. This one really goes for the triumphant gallop favored predominantly for the genre, mixing in some really enjoyable fire in the riff-work which makes their sparkling melodic keyboard accents all the more impressive. Shimmering along throughout the blazing rhythms and managing to mix in a great triple-vocalist attack with dueling female voices alongside the victorious main male vocalist, the band manages to readily evoke the majestic atmosphere rather effectively. When the band drops in tempo for more of a mid-tempo charge, those keyboard accents take more of a showcase here with the galloping chugs allowing for a rather impressive surge out brilliant melodic outbursts that shine really nicely alongside the rather enjoyable mid-tempo elements that feature bigger and grander rhythms than these more laid back and restrained like proper mid-tempo melodic power metal tracks generally provide. The fact that these are generally grouped onto the back-half of the release is a bit of a slight flaw here with this one obviously toplined with the faster tracks leaving the slower ones and the ballad afterwards, but this isn’t that big of a flaw here.

With some minor issues springing up more from the running order rather than any kind of performance-issues or any other factors to be had here, this is a wholly enjoyable and fiery brand of melody-tinged power metal that will readily appeal to all fans of Euro-accented power metal.


Does it sound good? Order it from here:
http://www.usstore.it/index.php?id_product=2106&controller=product&id_lang=1&search_query=Sailing+to+Nowhere&results=1
Posted by slayrrr666 at 12:41 PM