Sarcasm (Swe) - Within the Sphere of Ethereal Minds 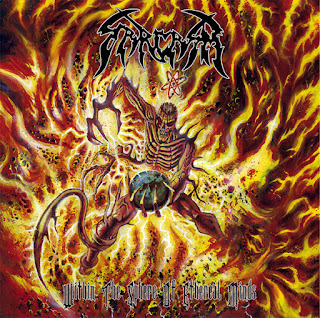 Artist: Sarcasm (Swe)
Release Title: Within the Sphere of Ethereal Minds
Year: 2017
Label: Dark Descent Records
Genre: Melodic Death Metal
Tracklisting:
1. Bloodsoaked Sunrise
2. From the Crimson Fog, They Emerged
3. Embodiment of Source
4. Scars of a Land Forgotten
5. In the Grip of Awakening Times
6. Silent Waves Summoned Your Inner Being
7. A Black Veil for Earth
8. The Drowning Light at the Edge of the Dawn

Attempting to build on their career success, Swedish death metallers under the name Sarcasm have had plenty of competing resources derailing the launch of the band back in the mid-90s and has resulted in their long-suppressed debut being released just last year. Going further with the additions of new bassist Jonas Söder, returning guitarist Anders Eriksen and drummer extraordinaire Matte Modin, the groups’ true sophomore effort was released April 28, 2017 on Dark Descent Records.

Managing to sound like their old selves, the bands launches a fine assault here featuring plenty of furious melodic rhythms alongside their traditional leanings. The main element here is a rather dynamic outpouring of light, melodic rhythms running along the majority of the tracks here, generating a pleasingly biting tone with the swirling riff-work alongside the melodies. It drives along at a rather solid mid-tempo thrash-style pace as well, featuring plenty of rather stylish and blazing energetic rhythms in a dirty old-school thrash-like setup that it manages to whip together a truly frenzied and frantic nature that still brings out the celebrated melodic leads to run alongside the riff-work and giving the album some rather engaging efforts. While this setup works for the vast majority of the time, it does leave this one with its main flaws easily highlighted. Quite simply, if there’s not a really engaging up-tempo thrash piece for the track to hang its melodies off of, then the album tends to just sound like a rather bland mid-tempo sea of rather bland riffing just plodding the album along rather lazily, making this one feel just rather dull more than anything. This also ends giving this a problem of feeling much longer than it really should because there are tracks that zip by being rather frantic and thrash-driven while the more plodding and overdrawn efforts are so endless they make the album a somewhat chore to sit through which speaks volumes due to its brief running time. Hopefully, this can be ironed out in the future and repaired as there’s some solid work wasted due to these flaws.

Despite some rather troubling work at times here with the rather bland slower sections featured throughout here, there’s more than enough to like here with the melodic output that this one will be of interest to those who enjoy the old-school melodic death metal scene for the most part.


Does it sound good? Order it from here:
https://darkdescentrecords.bandcamp.com/album/within-the-sphere-of-ethereal-minds
Posted by slayrrr666 at 1:51 PM