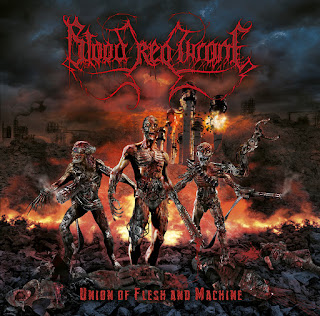 One of the genre’s leaders, Norwegian death metal machine Blood Red Throne has fine-tuned their attack into as devastating and dynamic a group found in the scene today. Now rejoined by original drummer Freddy Bolsø to the group’s ranks, their vicious eighth full-length effort from the group is released July 25, 2016 on new label Candlelight Records.

Still going strong throughout their career, this effort here quickly shows why they’re at the top of the genre with the way in which this one goes about its attack. The bands’ patented, deep churning riff-work with a strong technical bent are at top-form here, switching expertly from a blasting groove into the mid-tempo crunch patterns and even utterly frenetic paces that just utterly rip through ferocious blasts of swirling patterns offering plenty of full-speed tempos to the proceedings. Each of these sections, from the groove-filled chug to the tight, technical crunchy patterns manage to work out a balance and variance to the album that’s quite distinctive where it’s able to tap into the violent intensity that’s been a trademark of their core sound while also easing up enough so that the impact is still forceful while remaining a heavy, churning beast of an album. Even more impressive is the fact that these varying rhythms and arrangements still manage to capture their trademark biting professionalism, as there’s a dynamism to the tracks being able to switch expertly to these styles while managing to contain enough of a technical undercurrent to appeal to the old-school crowd while whipping up the more ferocious and thumping intensity found in the more modern school of sound as the heavy, deep-seated thumping in the album is quite infectious and really works out very well here. The album does have one minor nit-pick of a flaw here in that the mid-section of the album tends to run through some pretty repetitious patterns and seems to feature some overly-familiar rhythms with the tracks yet that’s all it really is as this was yet another utterly strong effort.

With yet another strong and dynamic display of their patented attack and the most minor of nit-picky style of flaws to be found here that might not even be a flaw to some, there’s so much to really love about this one that it’s quite an impressive release for fans of the bands’ style or old-school death metal fans in general, while most straightforward death metal fans will appreciate it as well.


Does it sound good? Order it from here:
https://shop.napalmrecords.com/blood-red-throne-union-of-flesh-and-machine-cd.html
Posted by slayrrr666 at 12:16 PM