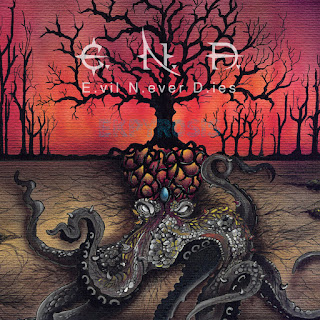 One of the earliest thrash bands in the country, Italian thrashers Evil Never Dies initially emerged during the height of the genre back in the early 90s, but beyond a few demo tracks never did much until their first professional output coming from EP releases in the late 2000s. Now finally able to get their first true release ready, the groups’ debut effort was released February 28, 2017 on Via Nocturna.

As befitting their old-school style, the basic approach to be found here is straightforward and decidedly old-school flavored thrashing. This goes for fairly lively crunchy patterns in the riff-work and really keeps the pacing incredibly simplistic here, alternating between straight gallops and driving mid-tempo chugs that contain quite a solid diversity to the tracks. Given that these are generally accompanied by a thunderous rhythm section and plenty of intensity, there’s a wholly enjoyable attack to be featured here that gives this one a firm touch to the old-school days. Given that this one features such a strong and generally one-note style performance, it does tend to contain a few minute missteps. The biggest issue here is that the album is basically intense but derivative, containing plenty of tight and vicious riffing but doesn’t really go further with developing them, going instead for rather plain and predictable setups that are more vicious through the genre rather than anything else. It gives the album a rather depleted feel and doesn’t really offer up that much in terms of enhancing the overall feel of the album beyond offering up more of the same rhythms and patterns, which does hold this one down somewhat. As well, that remix at the end of the album is so unnecessary that it really just drags it the album down quite a bit.

With some rather damaging flaws here and some generally enjoyable if not-that-impressive positives, overall this one just seems to be quite a bland and overall unnecessary offering that just doesn’t bring much to the table here and leaves this one only for the most devout old-school thrash fanatic.


Does it sound good? Order it from here:
https://vianocturna.bandcamp.com/album/ekpyrosis
Posted by slayrrr666 at 12:29 PM