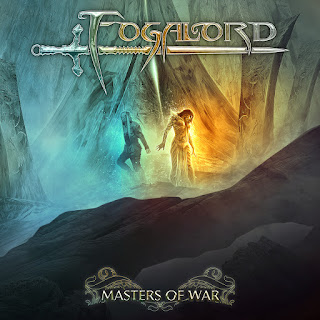 Artist: Fogalord
Release Title: Masters of War
Year: 2017
Label: Limb Music
Genre: Symphonic Power Metal
Tracklisting:
1. Il racconto della tempesta
2. Rising Through the Mist of Time
3. Daughter of the Morning Light
4. Masters of War
5. By the Everspring Tree
6. The Storm of Steel
7. Absence of Light
8. When the Blizzard Awakes
9. In Everwinter Wait
10. The Gift of the White Lady
11. The Sword's Will

Coming onboard with renewed intensity, Italian symphonic power metal newcomers Fogalord quickly took the scene by storm and formed this newfound hero in a scene that all comes from them incorporating more of their trademarked elements into their newest effort. Now after a five-year gap following their initial appearance, the groups’ sophomore release was initially released June 2, 2017 on Limb Music.

Much like their past efforts, the group is simply intent on offering the attack from a strong series of epic rhythms that add plenty of greatness to their approach. This is based around the tight, flowing riffing here that propels this one along at rapid paces by offering an endless series of fiery speed metal riff-work in the greatest sense of the bands’ past. The rhythms are fast, vicious and built for glorious harmonies when utilized in conjunction with the blistering drum-work and shimmering keyboards that are draped all over the music here that adds an overwhelming atmosphere of epic grandeur that makes for a fun time. Even more impressive is the fact that these are put to the fullest test on a ten-minute-plus epic that enables every facet of their sound to be put to the test with plenty of exciting and enjoyable moments spread throughout which really ratchets up the enjoyment here for including such an enjoyable piece here. While these here are the overwhelming factors on display here, there’s a slight discrepancy here in the album dropping in intensity for bland mid-tempo gallops that just don’t have any kind of impact like the previous tracks, making for a somewhat lessening approach than normal and causes this one to lose a lot of its steam during the middle of the album where all those tracks are placed. Spreading them out on the album would’ve been preferable, yet that’s still an obvious factor about this one.

Filled with plenty of ravishing symphonic goodness and making up for only a few minor flaws ends up working rather well for the band here by enabling this one to come up with plenty of enjoyable moments throughout here that this becomes another notch for a promising act in the symphonic power metal realm.