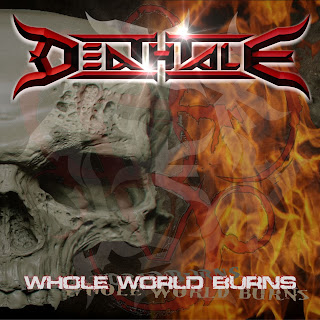 Following the acclaim of their previous release, Austrian thrash/death metallers Deathtale carries on with the rabid style of 80s influenced thrash with the fury and intensity of death metal into a more powerful, vicious entity. Enduring a host of line-up problems with the loss of guitarists Max Dengler and Peter Musch for Arian Rezale as well as seeing vocalist Jan Geyer being replaced by Patrick Pieler, their second full-length release is originally released February 12, 2016 on Terrasound Records.

For the most part throughout here there’s a strong and extremely well-defined mixture of ravenous thrashing and plenty of deep, churning riff-work that manages to get plenty of rather explosive rhythms and charges throughout here. With their more enhanced and balanced writing bringing out a strong series of vicious, cutting riff-work that takes on the more intense end of the thrash scene with more violent rhythms from the death metal style aggression packed into them, the whole effort has a rather engaging intensity that allows for plenty of enjoyable energetic rhythms that pack plenty of solid moments throughout here. By furthering those intense rhythms with a stuttering modernized metalcore-style series of riffing that packs in sprawling tempos alongside the tight, speed-driven rhythms and utilizing a strong melodic framework in the soloing and intros that’s exceptionally pleasing and enjoyable this one really gets a lot right with it’s strong attack. The only areas it really stumbles are the few spots where it drops the thrashing altogether for a sort of sprawling metalcore-influenced chug that simply plods along with somewhat lifeless rhythms and dull energy that stands as a stark contrast to what came before elsewhere on the album which had plenty of more engaging and interesting arrangements throughout here. Thankfully, this is kept to a minimum and the whole album comes off much better as a whole.

Though there’s a few minor troubling issues at work here with this one that mainly comes from the tines that it slightly stumbles in keeping the energetic riffing up, there’s still more than enough viciousness and intensity that works well here that it really becomes a fun listen to fans of more violent modern thrash or aficionados of this sort of vicious thrash/death metal style.