Perseus (It) - A Tale Whispered in the Night 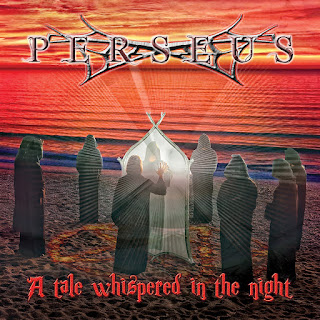 Still holding true to their sound, Italian heavy/power metallers Perseus are continuing their concept album storyline from their debut about Dr. Icarus Lazard and his quest to lead a powerful army to fight against a dark force opposing their eternal quest. Getting the storyline continued in their second release, the album is released April 1, 2016 on Buil2Kill Records.

This here is quite a fun album, featuring their blend of sparkling traditional heavy metal and melodic power metal hymns. Featuring a deep, steady rhythm section full of a tight, engaging crunch that keeps this barreling along at a fine mid-tempo pace while enabling the kind of glorious harmonic leads to sprout forth giving this a rather appealing melodic crunch. This manages to become the main style here during the bands’ main, proper tracks which is featured enough here that it’s quite an appealing time, and when given breathe amidst the ballads which slow these rhythms down even further to accent the soft, romantic and the strong central storyline concerning their epic concept makes for a generally rewarding time on the album. Though there’s a lot to like here, right off the bat what’s immediately glaring about this one is the absurd track length here, as the bands’ penchant for peppering the entire track with a short, bonus interlude setting up the next proper track is quite a struggle to get over. Even though it doesn’t really hurt the album all that much, the fact that it’s just such a startling tactic of bringing the album’s momentum to a grinding, startling halt every time it’s going to a new track since it only occasionally brings two tracks back-to-back before changing into a short interlude. Without these buggers and just keeping the momentum going from song-to-song would bump up this one significantly as the main tracks are just so much fun but get short-changed with their placement here.

With a lot of absolutely great parts to really like here interrupted only with a truly stuttering amount of momentum-stopping segments keeping this one down, this is a pretty torn one overall as the stellar music on the main album might be enough to overcome the flaws and appeal to the fans of this style, while the flaws could also be enough to prevent a lot from really liking it.

Does it sound good? Order it from here:
https://www.amazon.com/Tale-Whispered-Night-Explicit/dp/B01FEZQTDM
Posted by slayrrr666 at 3:08 PM