Crisix - From Blue to Black 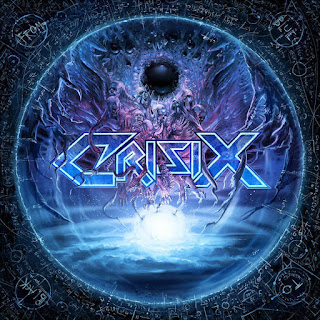 Quickly rising up through the scene, Spanish thrashers Crisix have turned themselves into one of the brightest spots in the crowded revival scene with a strong flurry of releases leading up to yet another explosive offering. With long-time bassist Marc Torras departing and being replaced by Dani Ramirez, the group prepares its third full-length effort March 18, 2016 on new label Listenable Records.

For the majority of the album, this one manages to readily employ the kind of tight, ravenous old-school thrash that readily bursts with a savage and utterly ferocious attitude. This bristles with plenty of furious speed-metal patterns which are given a wide-ranging dexterity here which makes for even more great times here as the band is able to whip around the hard-hitting, furious barn-burners to upbeat mid-tempo stompers that give off a lively party-anthem vibe in the riffing and groove-laden chunks of crunchy riff-work which give this a stylish sense of variety to the album as a whole while still managing to maintain an effective old-school atmosphere in the riffing structure. Though that laid-back, party-fun ambiance is quite prominent in here the fact that it can still lay down the thrashing anthems is what really sells this one as the ability to bounce back and forth is a great advantage in offering up a varied and engaging effort, though it also exposes the minor issue that crops up here. Indeed, the album’s wildly varying tone and approach might in fact rub some the wrong way when it comes to those looking for an intense and rocking thrasher which the band is quite clearly competent at, and while there’s not a big tonal shift present when it comes to offering up the other tracks it does have some lower tempos that stick out here for those that prefer straightforward and full-throttle thrashing. Still, it’s not a big detriment on the album and gives this a rather enjoyable atmosphere and tone.

Despite featuring one minor element that doesn’t really impact the album that much but does become somewhat noticeable at times, this ends up being yet another strong and impactful release from one of the strongest thrash acts in the revival scene and makes for a stellar addition to any retro-thrash or old-school thrash fan in general.

Does it sound good? Order it from here:
http://listenable-records.bandcamp.com/album/from-blue-to-black
Posted by slayrrr666 at 6:41 PM