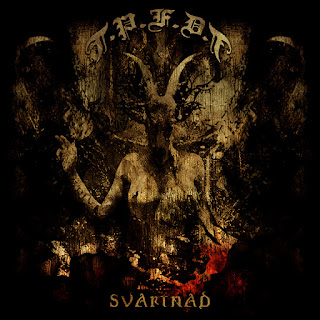 Artist: The Pete Flesh Deathtrip
Release Title: Svartnad
Year: 2016
Label: Critical Mass Recordings
Genre: Death/Black Metal
Tracklisting:
1. In Ruinam Iniquitas
2. Burial Shore
3. All the Serpents
4. The Sun Will Fail
5. Melting the Frost from Your Eyes
6. The Winter of the Wolves
7. She Dwells into the Dark
8. Svartnad

Though once a prolific artist, Swedish one-man blackened death metal project The Pete Flesh Deathtrip has quickly become the sole focus of the artistic namesake and forged a fearsome live line-up to compliment his vision and spread the project out to the masses. Bringing aboard the mighty Henrik Borg as a session drummer on the new material, the bands’ second full-length was originally released May 16, 2016 on new-label Critical Mass Recordings.

As befits the hard-charging sound present here, this is mostly a blistering, blasting assault of old-school inspired riffing that includes plenty of charging riffing scattered throughout here. Running the fine line between the churning buzzsaw patterns of the traditional Swedish scene with a furious blackened spark here with a series of fiery tremolo riffing that’s employed quite nicely here, the bands’ mainly mid-tempo approach lets both of these styles come into play here. The album generates more of a sprawling, mid-tempo charge here that takes the Swedish style influences to the forefront by offering up a strong charge with the chugging rhythms and plenty of blackened melodies to offer up a much more extreme charge than would be present on such traditional death metal styled affairs even with this one dropping that in favor of going for the explosive up-tempo thrashing typically found in the normal Swedish death metal scene with the crunchy guitars and utterly ravenous drumming. Still, it’s the epic nature generated by the sprawling black metal melodies here that make for quite a strong overall attack here with the main attack coming together into a strong mixture of the two, and it doesn’t have much overall really wrong with this one as a result. The album’s main stumbling block here is the overly-familiar and rather overused series of riffing styles which really tends to make this one come off as yet another in a long line of overly-melodic and familiar Swedish-influenced death/black metal acts. That’s not the biggest detrimental factor here, though, which does come up even with other factors to hold this up over this bit.

Despite a minor stumble with the rather familiar and somewhat overused riffing patterns that come into play quite frequently, there’s a lot to really like here with this one in terms of that overall attack and it’s certainly a really enough effort for anyone remotely into the blackened death metal scene or melodic extreme metal in general.

Does it sound good? Order it from here:
http://criticalmassrecordings.bandcamp.com/releases
Posted by slayrrr666 at 3:12 PM