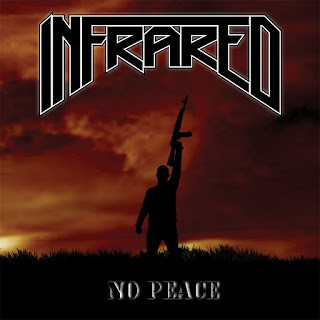 Artist: Infrared
Release Title: No Peace
Year: 2016
Label: Self-Released/Independent
Genre: Old-School Thrash Metal
Tracklisting:
1. Inframental
2. T.O.C.
3. No Peace
4. My Good Will
5. Social Science
6. Cliche
7. Some Kind of Disease
8. Down Below
9. Untimely Storm
10. Thoughts Caught (In Between)
11. In Search of...

One of the scenes’ greatest comeback stories, Canadian thrashers Infrared have finally followed through on the premise of their debut demo after twenty-seven years of being away from the music scene with their reformation several years ago. Now after two years of additional rehearsals to provide the finishing touches to their tracks, the group finally prepares it’s full-length debut independently-released March 25, 2016.

As befits their old-school stance, the band clearly adopts a straightforward and unwavering old-school tone and approach that’s influenced quite heavily from their peers in the scene during the initial run of the band which is basically simple crunchy Bay-Area thrash throughout this one. The choppy rhythms, explosive melodic breaks and varied tempo changes that run from tight gallops to heavy, chugging mid-tempo charges manage to effectively evoke that old-school feeling for the main part of the album which gives it a startling consistency during the tracks with the group able to keep the main charge rather consistent and powerful. That it manages to even weave along a more consistent old-school feel in the varying tactics that were employed back then with swirling melodic intros, dynamic tempo changes and a variety of different riffing tactics that offer up relaxing epic moods during sections in the tracks before offering up charging full-throttle breaks creates a wholly effective atmosphere for the most part that does provide this one with it’s main flaw here. The fact that it does play so close to the vest of so many ravenous thrashing bands in that style gives this one a rather familiar feel that plays like countless other bands in the revival or even of the old-guard still charging along that it can feel quite familiar and like it’s going through the motions overall which does crop up throughout here from time to time. Strangely, though, this here manages to feel part of the albums’ charm as this actually was a band around during that time and doesn’t really affect it that much.

Though it can play itself a bit too close to the old-school tone and feel quite often in here, the major factor going for this one in that the band did form during that time and are only now through circumstance finally getting it out overrules that by and large which makes for a rousing and thoroughly enjoyable release for anyone into the old-school thrash scene in general.

Does it sound good? Order it from here:
https://infraredmetal.bandcamp.com/
Posted by slayrrr666 at 3:09 PM