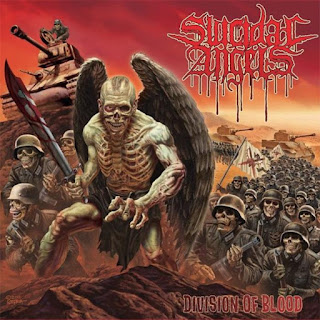 Rapidly rising in the scene, Greek thrashers Suicidal Angel continue to offer a punishing assault of revivalist thrash that’s allowed them to become one of the main exponents of the scene in general. With a slight line-up change that sees guitarist Chris Tsitsis exit in favor of renown guitar-shredder Frank Drax, the group’s sixth full-length arrives after a two-year gap on May 27, 2016 on NoiseArt Records.

Much like the group’s previous releases, this one is mostly based around the patent tight, confined riffing style that simply oozes speed and thrash metal. There’s a reckless abandon to the riff-work here as the band shifts from free-form galloping to tight, mid-tempo chugging that bridges the different styles in this one. It’s mostly a sense of furious old-school riffing that carries this one along, bringing along a frantic pace and energy here that makes this tight speed metal style all the more explosive and engaging which is where the band’s relentless assault makes the most impact by just charging forward for the majority of the tracks and then slowing into a mid-tempo chug for a breather that still retains a sense of cohesion with the much more predominant raging patterns. This is a mostly effective balance that tends to focus on the band’s tighter, straightforward riffing style for the most part, letting it get graced with the group’s rapid-fire rhythm section to create wholly enjoyable, ripping tracks full of tight, condensed patterns with the occasional melodic break that packs a lot into the confined spaces in the tracks. That leaves this one without much really wrong with it beyond the fact that there’s just not a whole lot of difference from this and any other album in their catalog. It’s all pretty much the same sort of material present over and over again, which gives this a big case of over-familiarity before very long with the album going through these repetitious patterns. As well, the silence at the end does tend to drag itself along way past its due date putting it as a twelve minute-plus epic and could’ve been stopped when the song-proper ended, but otherwise there’s little about it that doesn’t work.

Despite some minor hiccups here and there don’t really matter much to it in the long run, this one really manages to come off as one of the more impressive and enjoyable efforts in their consistent run of albums which makes this a fine pick for any revivalist thrash aficionado or fan of the bands’ previous work.

Does it sound good? Order it from here:
http://divisionofblood.noiseart.eu/
Posted by slayrrr666 at 10:58 AM