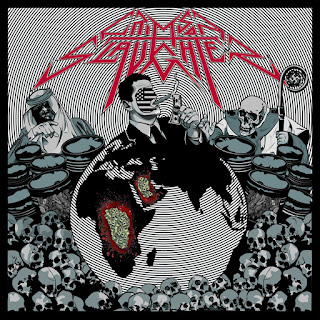 Formed just recently in 2015, Spanish thrash metal band Crimson Slaughter came together from members of other metal bands in the southern area of Madrid with the intent of showcasing their love for old-school metal. Quickly taking the plunge into releasing their first works out to the public, the group prepares their self-released full-length debut June 27, 2016.

Frankly, this here is quite an impressive and wholly enjoyable retro-thrash assault that begins with the wholly blistering riffing here. Taking the deep, heavy churning crunch of the Bay Area scene and wrapping that into a frenzied, explosive mix of up-tempo patterns that generate a kind of off-the-rails intensity that results in utterly frantic, blistering rhythms full of dynamic and tight patterns. This frantic energy is quite enjoyable with plenty of utterly frantic rhythms and explosive, charging riff-work carrying this along without much deviation throughout here as the full-throttle paces generate the kind of enhancement required to generate this kind of frenzied patterns that are featured throughout here with the extra dose of up-tempo riffing here generating the old-school feel here quite nicely alongside the fine mix of varied tempos and rhythm changes that add a balance to the energetic thrashing. This is such a fine and energetic old-school assault that it manages to readily capture that feel to such a degree that it really doesn’t have an original bone in it’s body as it runs through the paces in such a manner as to emulate and ape the scene quite frequently. It’s effective at conjuring that sound and style, but so do dozens of other bands and it’s all part of the endless crop of bands attempting the same thing. As well, the hoarse shrieking vocals can take some getting used to, but beyond that there’s not much else wrong here.

Though this becomes yet another frenzied and energetic band working in the same playbook as dozens of other groups, there’s an infectious and utterly uproarious amount of style here that makes this one quite enjoyable and frantic to those that appreciate this reckless brand of revival thrash or the style as a whole.


Does it sound good? Order it from here:
https://crimsonslaughter.bandcamp.com/releases
Posted by slayrrr666 at 1:42 PM