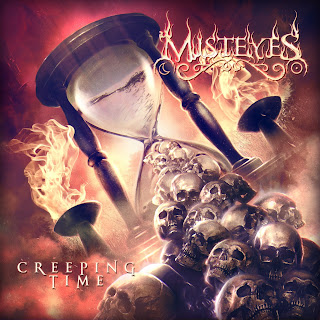 Initially forming in 2012, Italian gothic/death metallers Misteyes underwent a drastic changeover in the beginning as their sound quickly shifted away from a melodic death/black sound to a more prominent gothic-influenced approach heralded by rounding out the bands’ lineup with female vocals and a permanent keyboard. Ready to bring their vision of light and darkness center-stage, the group prepares its full-length debut release April 8, 2016 on Maple Metal Records.

As befits the bands’ style, the album is generally awash in lush, vibrant rhythms that take the steady, straightforward riffing style of gothic metal which is powerful, tight and rather light-hearted melodies which are the major focus here. This is somewhat technical yet still allows for plenty of extended sections of tight, swirling speed-metal riff-work that enables for harmonic meshing with the keyboards keeping in perfect sync with the tight rhythms as the album shifts dynamically between these explosive sections and a more mid-tempo prowl that works wonderfully here. These slower, more haunting passages are augmented by the operatic female vocals for the most part which is a glorious contrast to the lighter sections elsewhere that are dominantly featured with the melodic runs and swirling keyboard work creating this style and both wonderfully complimenting each other quite well. As this work here is the dominant vibe on the material, it’s given plenty of dynamic vibes by the wholly drastic manner in which it changes over throughout here as it’s quite adept at maneuvering through these change-overs quite well with the sudden crashing riffing blowing up the slower tempos while still retaining the harmonic gothic undertones present. While all of this is exceptionally enjoyable and made all the more so for it being a debut release, the fact that this is somewhat bloated in the second half with a few too many tracks does make this a little overlong and somewhat difficult to get all the way through here as the running time does make this a struggle at points especially with it featuring some weaker tracks. However, it does get a pass at this for being a debut.

Overall, this was quite a strong and dynamic release that offers up plenty of enjoyable elements with only a minor flaw here in their overzealousness to present too much of their material to the world that enables this to readily appeal to many fans of the gothic or symphonic metal soundscapes who will find a lot to like here providing that one element isn’t a detrimental one to the listener.

Does it sound good? Order it from here:
http://misteyes.bandcamp.com/releases
Posted by slayrrr666 at 2:48 PM