Abandoned by Light - Broken Mirrors to the Stars 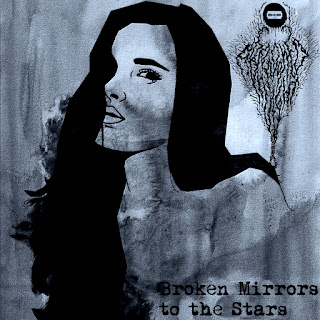 One of the scenes’ more prolific artists, UK-based one-man depressive black metal act Abandoned by Light have carried on the style of their forebearers by pumping out numerous releases throughout the calendar year. Placed alongside several splits already, the groups’ second full-length of the year and eighth overall in just three years of existence is independently released September 10, 2016.

As is part of their heritage, the fact that this one here is such a cold, raw experience is the album’s main selling point as it offers up plenty of the genres’ typical output. This is typified by the excessively long, drawn-out riffing that utilizes ultra-simplistic plodding tremolo patterns that go about in many slight variations of the same tempo which creates an overall feeling of sameness throughout the album. This goes alongside the cold, plodding rhythms that are featured here which enhance the experience even more by leaving a lonely feel to the riffing and letting it carry on throughout a repetitive cadence that truly makes for an enhanced feeling of sorrow and despair in the arrangements. With the low-level vocals and drumming in the overall mix of the album letting the swirling riff-work at the forefront to be the biggest contributor to the album’s prevailing theme of sadness and loneliness. Still, that doesn’t take into account several other determining factors present in the album, too of which come together just simply by looking at the tracklist. The number of tracks comprising this official release is a gaudy amount that offers up severe resist from most simply on that scale along as the total number of just under twenty tracks is a daunting challenge to undertake. Even greater is the fact that a vast majority of these tracks challenge the ten-minute mark and several actually cross over into even greater lengths which together make this one of the most exhaustive listens in the genre as this is a near-impossible album to sift through in one sitting. Taking into account the droning, repetitive nature of the material which is so utterly effective at generating that type of sad, introspective experience here makes this an album that really struggles to remain listenable throughout it’s entirely as the two-and-a-half hour running time. Likewise, the need for so many covers on here is a slightly questionable choice as the possibility of removing several of them would help quell that somewhat, but still this is a very effective but daunting album to undertake.

Setting out to accomplish what it wants to manages to earn this one some rather strong marks, yet the other underlying factors present here in which the sheer draining, exhaustive nature of the album as a whole both in volume and concept of the material makes this one strictly for the most devout depressive black metal fanatics only.

Does it sound good? Order it from here:
http://perpetua.bandcamp.com/album/broken-mirrors-to-the-stars-4th-lp
Posted by slayrrr666 at 4:05 PM