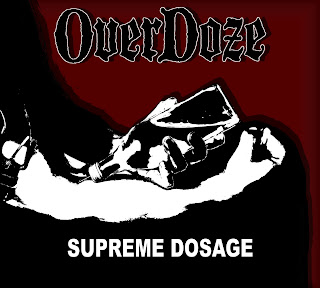 Formed in the summer of 2009, Finnish thrashers Overdoze first recorded two demos during 2011 in fine succession which has helped hone their style and craft through further releases that have led to their first live gigs in preparation for this release. Coming together as a fine power-trio, the group prepares to release their debut album independently November 27, 2015.

For the most part there’s not a whole lot really obvious about the bands’ intentions here to do anything other than going for straightforward simplistic thrash metal. Not even going for the old-school crunch or even more modern influences, this one here instead goes for a more simplistic and mid-tempo approach with a sprawling series of rhythms and a loose rhythm-section that keeps the work rather downbeat and ill-fitting for the genre as this doesn’t carry the requisite energy usually associated with this type of work. The meandering sections in the riffing doesn’t help either, as the music moves through rather simple-minded and rough rhythms that don’t really pack much of a punch beyond a few of the tougher sections which pop up in a few of the tracks. Still, the choppy rhythms featured here don’t really give this any kind of obvious energy or deep churning patterns that give this the typical thrash-style work found here as this is rather lifeless heavy metal played at a faster chug than usual. It’s pretty limp in most regards and only occasionally gets some energy into the proceedings which does make for some decent-at-best tracks that stand out in the second half which is where this gets the most life out of their rhythms, but the overall feel is still drowned out by the still rudimentary rhythms throughout here.

Still obviously suffering through a strong set of growing pains as there’s some rather uninspired work here that’s too limp and bland to really get the most out of their work here, this is an obvious case of still needing more time honing their sound before it really becomes ready for more out there to get into this one and is pretty much only for the most devout thrash apologist.

Does it sound good? Order it from here:
https://www.levykauppax.fi/artist/overdoze/supreme_dosage/#448744
Posted by slayrrr666 at 11:36 AM