Slaves of Suffering - Advent of Despair 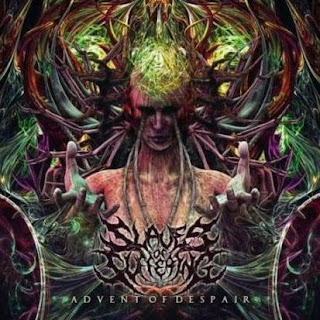 What immediately becomes present with this one here is the fact that there’s a strong mixture of stylish old-school death metal within the brutal rhythms. Featuring the tight, deep churning riff-work with frenzied buzzing patterns alongside frantic blasting drumming throughout here, this one readily captures a frantic brutal vibe that brings along plenty of crushing rhythms and pummeling tempos to the forefront with the group opting to deliver these at mostly full-throttle paces. Swarming along throughout the rhythms here makes the riffing tend into a full-on blur of brutal riffing that comes off rather nicely if somewhat formulaic here, and with the band opting to go for some rather more sprawling sections to support the solo-work here it generates more of a fine old-school death metal vibe than what is usually found in the genre. Still, it’s hard to really overcome the formulaic and somewhat overly-familiar approach through this one which tends to cause this to come off as yet another band in a packed, crowded field in the genre as there’s numerous other bands packing that kind of choppy, feverish riffing and blasting drumming into their sound to let the band really stand out with any kind of voice or identity of their own. The old-school influences do this quite well, yet it’s not done often enough throughout here to really mean as much as it should’ve considering what’s a nice part of their sound is featured only sporadically which is what does cause this to slip down somewhat.

Though it’s somewhat slightly problematic with it’s lack of real originality and the mis-use of a potentially identifiable feature that could be harnessed to accomplish that, this being a debut causes these to slip by the wayside somewhat so that it does end up becoming a solid choice for the most fervent and undiscerning brutal death apologist or fan of extreme Latin American metal.

Does it sound good? Order it from here:
https://ungodlyruinsproductions.bandcamp.com/album/advent-of-despair
Posted by slayrrr666 at 12:01 PM