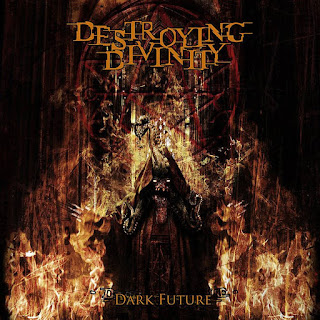 Further establishing their reputation, Czech death metal veterans Destroying Divinity continues to showcase a growing trend in their homeland to play early US style death metal with doses of extreme creativity and uniqueness, which is what’s continued here. The third album in their decade-long career, delivered after a six-year layoff between releases, is initially released June 25, 2011 on new-label Brutal Bands.

As is customary for the group now, this one carries along their traditional stamp of quality, old-school death metal with their exuberant mix of both US and European styles. The US variations come namely the way it thrashes away with their technical-based rhythms across bouncy guitar riffs, dynamic tempo variations and a swamp-ridden atmosphere while invoking the atmosphere and sense of dread in the imagery that’s quite eerie. This ends up delivering raging, up-tempo riffs with a slight technical bombast into brutal, tight formations that definitely offer up a sense of darkness and intensity through a blasting drum-attack and technical riff-work that remains ferocious and vicious with its’ scathing intensity which recalls its forbearers quite nicely. Alongside such tight, intense tracks, the veteran sense of knowing when to throw in a melodic line or lead-work is mixed in, putting this in a rather fine league where it blasts away furiously before injecting a slower tempo or augmenting the intensity with a lighter mood through sparing use of a melodic tempo. Surprisingly, this results in somewhat bouncy and energetic rhythms than would normally be considered in such a genre as befits such a scene here, as the typical impetus is to just blast away with reckless abandon and scald all those who stand in the way, whereas here those get distracted by the melodic tones before getting scalded into oblivion and it generates a lot more favorable response when it doesn’t employ this for every track throughout as the sporadic use makes it’s surprise appearance all the more fruitful and the devastating impact of the blistering drumming and raging, brutal guitar riffs seem all the more impactful. As a side bonus, the impact against the brutal, deep gorilla growls that populate this one makes the melody more striking against such straight-laced and intense brutality. Though it can utterly dominate with this approach, it does bring up one utterly minor flaw in that it really doesn’t do a whole lot wrong beyond recycle a lot of the same riffing patterns and rhythms throughout. This can be somewhat same-sounding after a while, though the devastating and pummeling attack manages to correct it.

That it features so many enticing elements without all that many flaws is the capper on one of the most undervalued, overlooked bands in the scene and really makes this one a no-doubt inquiry for any fan of old-school death metal or the revivalist scene in particular, though it's hard to imagine anyone remotely into the genre as a whole to have a problem with this one.

Does it sound good? Order it from here:
https://destroyingdivinity.bandcamp.com/album/dark-future
Posted by slayrrr666 at 3:07 PM