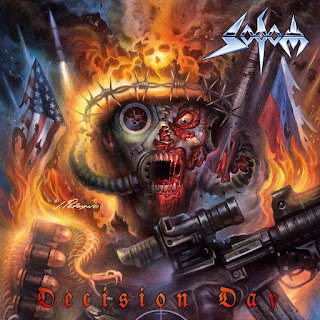 Charging forward with utter impunity, German thrash legends Sodom have truly cemented their legacy as one of the ‘Big Teutonic Four’ long ago while have rarely let themselves rest off those laurels with plenty of solid albums afterward. As the three piece’s now worked together enough to form a well-oiled machine, they prepare their fourteenth album to be released on Steamhammer August 26, 2016 as a half-concept album about the landing on Normandy in WW II.

For a band of their stature, there’s almost little surprise to be found here in terms of the music, which is what’s the case here. Tried-and-tested German tinged thrash is what’s on store here, ranging from the prototypical darker thrash rhythms that carry on with the kind of sprawling tremolo patterns recalling early black metal aesthetics while charging forward with the up-tempo thrash crunch, to the bands’ more modern sound of a straightforward groove-influenced approach which carries somewhat more of a melodic accent to their riff-work which manages to go for the slower, more relaxed tempos and sprawling sections that really bring about a more matured and nuanced action against the tight thrashing. In keeping with their past styles as well this even generates the kind of extended instrumental interludes found here that lets the group go for the extravagant sections letting their killer thrash riff really pick up a ton of extra room to really let loose and focus on working out the most mileage it can from these rhythms. As can be told from this, it’s all par for the course with the band here as they manage to once again work their classic sound to a tee, and that is pretty much the album’s greatest positive and biggest strike against it. While some would think that a band with a legacy as deep and rich as they have would think that a stylistic departure or experimental album would be a huge drawback, there’s a small section of the bands’ career just before here that managed to introduce new elements to their sound and it was quite well-done so the idea of continuing to incrementally introduce new material to play with wouldn’t be a big change for them, though as it’s the only flaw here this isn’t all that detrimental at all.

Once again, the band offers definitive proof of their legendary status with a wholly enjoyable and solid effort that continues to be really evocative of what they’re about as long as you’re not expecting this to try anything new which makes this a wholly worthwhile choice for fans of the band, the German thrash scene in general or simply old-school thrash aficionados.

Does it sound good? Order it from here:
http://sodom.lnk.to/DecisionDayID
Posted by slayrrr666 at 9:20 AM